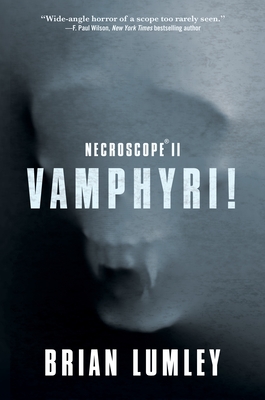 This is book number 2 in the Necroscope series.

The fear level rises in book two of Brian Lumley's Necroscope series, which blends disturbing horror and thrilling spycraft into a gripping whirl of terror and suspense!

In a small English village, Yulian Bodescu, infected with vampirism before his birth, uses his supernatural powers to build an inhuman army, turning ordinary people into creatures of destructive, unstoppable, unending hunger.

Harry Keogh, the Necroscope, has always known that death is not the end. Still, when he died, he hadn't expected to wake up in the body of his infant son. Yulian quickly decides that the best way to get rid of the Necroscope is to kill the baby.

In Romania, the remains of Thibor Ferenczy--the undead Thing in the Ground--are destroyed at last. The brief alliance between British and Russian psychic spy organizations is shattered when Russian agents capture Alec Kyle, the head of Britain's E-Branch, and drain all his secrets and memories.

Despite being stuck in an infant's body, Harry can still call on the world's dead. With battles to fight at home and abroad, he's going to need all the help he can get.

Necroscope II: Vamphyri! is the second volume in a powerful series that has enthralled millions of readers with its very different look at vampires and vampire hunters, at the dead and the living and the worlds they share.

Praise for the Necroscope® series:

Brian Lumley is a Grand Master of Horror and a winner of the British Fantasy Award. His many novels, including Necroscope, have been published in more than thirteen countries around the world. He lives in England with his wife, Barbara Ann.