Into the Dying Light (The Age of Darkness #3) (Paperback) 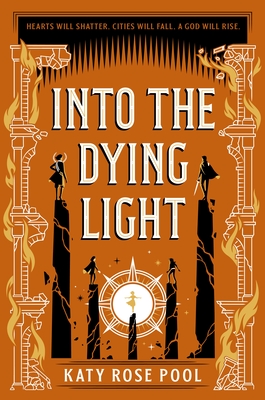 This is book number 3 in the The Age of Darkness series.

In Into the Dying Light, the jaw-dropping conclusion to the Age of Darkness trilogy, hearts will shatter, cities will fall, and a god will rise.

"A successful ending to a brilliant trilogy about human hope and connection." —Kirkus Reviews, starred review and Best Book of the Month

"Solidifies Katy Rose Pool's status as one of the best fantasy writers of the 21st century."
—Popsugar on As the Shadow Rises

Following the destruction of the City of Mercy, an ancient god has been resurrected and sealed inside Beru's body. Both are at the mercy of the Prophet Pallas, who wields the god’s powers to subjugate the Six Prophetic Cities. But every day, the god grows stronger, threatening to break free and sow untold destruction.

Meanwhile, far away from Pallas Athos, Anton learns to harness his full powers as a Prophet. Armed with the truth about how the original Prophets killed the god, Anton leads Jude, Hassan, and Ephyra on a desperate quest to the edge of the world. With time running out, the group’s tenuous alliance is beset by mounting danger, tumultuous romance, and most of all by a secret that Anton is hiding: a way to destroy the god at the price of an unbearable sacrifice. But the cost of keeping that secret might be their lives—and the lives of everyone in the Six Prophetic Cities.

The Age of Darkness trilogy is perfect for fans of Throne of Glass, Children of Blood and Bone, and An Ember in the Ashes.

Katy Rose Pool, author of the Age of Darkness trilogy, was born and raised in Los Angeles, CA before graduating from the University of California, Berkeley with a degree in history. Currently, she resides in Oakland, CA, where she can be found dreaming up spells and prophecies, rooting for the Golden State Warriors, and reading books that set her on fire.

A Kirkus Best Book of the Month!

* "A successful ending to a brilliant trilogy about human hope and connection . . . set in a diverse world that celebrates and affirms all kinds of love." —Kirkus Reviews, starred review

"Signature twists and last-minute turnarounds that make lifelong fans of Katy's work." —The Bulletin of the Center for Children's Books (BCCB)

Praise for As the Shadow Rises

"Nailbiting plot twists." —The Bulletin of the Center for Children's Books (BCCB)

Praise for There Will Come a Darkness

* "A well-crafted, surprising, and gripping start to a new trilogy." —Kirkus Reviews, starred review for There Will Come a Darkness

* "Masterful . . . full of genuinely surprising and interesting twists that will have readers anxious to get to the last page." — —The Bulletin of the Center for Children's Books (BCCB), starred review

“I dare you not to fall madly in love with the cast of characters.” —New York Times bestselling author Laura Sebastian

"You get the feeling Katy Rose Pool’s plot is always seven steps ahead of you. You’ll want to catch up as quickly as possible." —Refinery 29