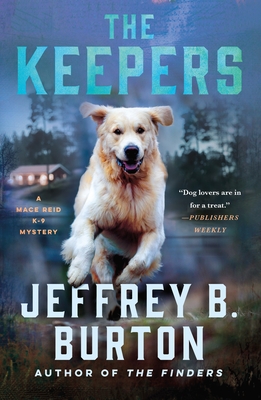 This is book number 2 in the Mace Reid K-9 Mystery series.

Jeffrey B. Burton's The Keepers is the next installment of the Mace Reid K-9 series, featuring golden retriever cadaver dog Vira and her handler, Mason Reid.

Mason “Mace” Reid lives on the outskirts of Chicago and specializes in human remains detection—that is, he trains dogs to hunt for dead bodies. He calls his pack of cadaver dogs The Finders, and his prize pupil is a golden retriever named Vira.

When Mace Reid and Vira are called in to search Washington Park at three o'clock in the morning, what they find has them running for their very lives. The trail of murder and mayhem Mace and CPD Officer Kippy Gimm have been following leads them to uncover treachery and corruption at the highest level, and their discoveries do not bode well for them . . . nor for the Windy City itself.

The Keepers is an exciting, fast-paced mystery filled with courageous dogs you'll want to root for.

JEFFREY B. BURTON is the author of many novels including The Finders, The Chessman, and The Eulogist. He is an active member of Mystery Writers of America, International Thriller Writers and the Horror Writers Association and lives in St. Paul, Minnesota with his family.