Last Call at the Nightingale: A Mystery (Hardcover) 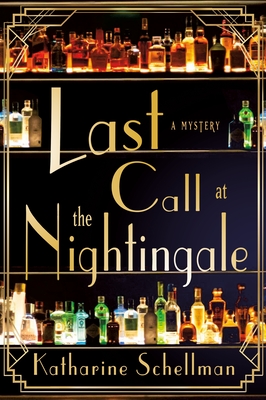 First in a captivating Jazz age mystery series from author Katharine Schellman, Last Call at the Nightingale beckons readers into a darkly glamorous speakeasy where music, liquor, and secrets flow.

"Schellman is at the top of her craft and delivers a murder mystery with clever twists and turns and memorable personalities."—Denny S. Bryce, Bestselling Author of Wild Women and the Blues

New York, 1924. Vivian Kelly's days are filled with drudgery, from the tenement lodging she shares with her sister to the dress shop where she sews for hours every day.

But at night, she escapes to The Nightingale, an underground dance hall where illegal liquor flows and the band plays the Charleston with reckless excitement. With a bartender willing to slip her a free glass of champagne and friends who know the owner, Vivian can lose herself in the music. No one asks where she came from or how much money she has. No one bats an eye if she flirts with men or women as long as she can keep up on the dance floor. At The Nightingale, Vivian forgets the dangers of Prohibition-era New York and finds a place that feels like home.

But then she discovers a body behind the club, and those dangers come knocking.

Caught in a police raid at the Nightingale, Vivian discovers that the dead man wasn't the nameless bootlegger he first appeared. With too many people assuming she knows more about the crime than she does, Vivian finds herself caught between the dangers of the New York's underground and the world of the city's wealthy and careless, where money can hide any sin and the lives of the poor are considered disposable...including Vivian's own.

KATHARINE SCHELLMAN is a former actor, one-time political consultant, and current writer. Her debut novel, The Body in the Garden, was a Suspense Magazine Best Book of 2020 and led to her being named one of BookPage’s 16 Women to Watch. A graduate of the College of William & Mary, Katharine currently lives and writes in the mountains of Virginia in the company of her husband, children, and the many houseplants she keeps accidentally murdering.

"Excellent . . . Vivian proves to be a most imaginative sleuth. Readers will eagerly await her return."—Publishers Weekly (Starred)

"The well-developed supporting cast is diverse in race gender, and sexuality, and the suspense will keep readers guessing until the end."—BookPage (Starred)

"A compelling, atmospheric series debut. Schellman expertly creates a strong sense of pace, introducing a nightclub as a world where people of different races, classes, and sexual orientations can come together."—Library Journal

"A Jazz Age murder thrusts a good-time girl into the uncomfortable role of secret shamus . . . A colorful period crime yarn with a heroine with rooting for."—Kirkus Reviews

"Readers will love Last Call at the Nightingale for its twisting plot, its flair for historical detail and its inclusive cast of appealing characters. Don't look away, as the surprises keep coming until the final page."—Shelf Awareness

“[Schellman] touches on issues of segregation, poverty, and class divides with a deft hand that leaves plenty of room for a very satisfying murder mystery with a great deal of heart.”—Mystery & Suspense

"This debut from Katharine Schellman is as thrilling as it gets. For any fans of mystery looking for a new spin on a beloved genre, here’s your next great summer read."—BuzzFeed Books

"As with the Nightingale club, the mystery plot crosses lines of class, gender, and ethnicity. This novel plays with our expectations and keeps our attention on every fast-moving page. Highly recommended."—Historical Novels Review

"Schellman has thoroughly researched the people and the mores of the period, and skillfully uses characters of different sexes and races that the reader slowly determines. Subtle, blatant, the book begs the question: 'When’s the next one?'"—Lavender Magazine

"Last Call at the Nightingale is a sexy, fun romp through the Jazz Age. With a well-plotted mystery and applause-worthy female characters, readers will soak up this spellbinding read."—Michelle Gable, New York Times bestselling author of A Paris Apartment and The Bookseller's Secret

"This sharply paced, queer murder mystery, set in 1920s New York City, offers equal amounts of atmosphere, danger, and crime-solving. Schellman is at the top of her craft and delivers a murder mystery with clever twists and turns and memorable personalities."—Denny S. Bryce, Bestselling Author of Wild Women and the Blues

"Complete with speakeasies, mobsters, and an unflappable flapper as its heroine, this is a book that should be savored with a glass of bootleg gin in one hand and a 78 of Louis Armstrong and His Hot Five on the gramophone."—Allison Montclair, author of The Right Sort of Man

"Brimming with Jazz Age atmosphere, suspense, and a cast of engaging characters. Vivian is smart and gutsy, a character you’ll root for. I’m already looking forward to her next adventure!"—Ashley Weaver, author of the Amory Ames and Electra McDonnell series

"Original, bold, and sexy. This delicious mystery takes you to the Nightingale, a club where people can be who they really are, but everyone has secrets. Dirty doings among New York's elite, family drama, and more than one love story make for a fantastic start to a great new series."—Mariah Fredericks, author of the Jane Prescott series