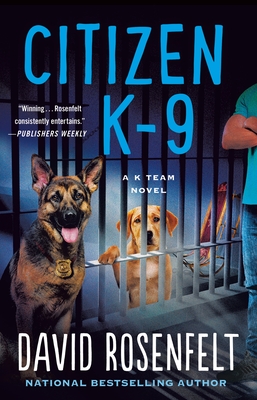 This is book number 3 in the K Team Novels series.

In Citizen K-9, bestselling author David Rosenfelt masterfully blends mystery with dogs and humor to create an investigative team that readers will be rooting for book after book.

The Paterson Police Department has created a cold case division, and they want to hire the private investigators known as the K Team to look into the crimes. After all, Corey Douglas and his K-9 partner, German shepherd Simon Garfunkel, recently retired from the force. Plus, another K Team member, Laurie Collins, used to be a cop as well.

Their first cold case hits home for the K Team. A decade ago, at Laurie's tenth high school reunion, two of their friends simply… vanished. At the time Laurie had just left the force, and Corey was in a different department, so they had no choice but to watch from the sidelines. With no leads, the case went cold.

As the team starts to delve deeper into the events leading up to that night—reopening old wounds along the way—the pieces start to come together. But someone wants to stop them from uncovering the truth behind the disappearance, by any means necessary.

"CITIZEN K-9 is a hit in terms of being a twisty mystery with subtle humor throughout, featuring characters whom we grow to admire. And, of course, there are the dogs." —Bookreporter.com

“It’s crime fiction and Rosenfelt is among the best.” —Rothenberg on WBAI/RADIO

“Made my jaw drop.” —Deadly Pleasures

Praise for David Rosenfelt and the K Team series

“Corey serves as an investigator and narrator every bit as ebullient as Andy and a lot more diligent . . . If you liked Rosenfelt's rollicking previous series, you'll like this one too.” — Kirkus Reviews

“A second outing for Paterson’s preeminent investigators ensnares one of their own members in uncomfortable ways. . . Though the case is a hot mess, the criminals’ sublimely simple central concept is worth all those subsidiary homicides.” — Kirkus Reviews on Animal Instinct