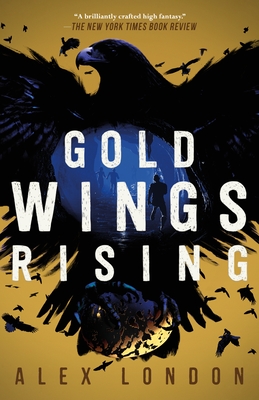 This is book number 3 in the The Skybound Saga series.

In Gold Wings Rising, the final installment of Alex London's Skybound Saga, Kylee and Brysen must fight for their lives and their humanity. Book 1 was a Today Show Book Club Pick!

The war on the ground has ended, but the war with the sky has just begun. After the Siege of the Six Villages, the ghost eagles have trapped Uztaris on both sides of the conflict. The villagers and Kartami alike hide in caves, huddled in terror as they await nightly attacks. Kylee aims to plunge her arrows into each and every ghost eagle; in her mind, killing the birds is the only way to unshackle the city’s chains. But Brysen has other plans.

While the humans fly familiar circles around each other, the ghost eagles create schemes far greater and more terrible than either Kylee or Brysen could have imagined. Now, the tug-of-war between love and power begins to fray, threatening bonds of siblinghood and humanity alike.

Alex London has written books for adults, children, and teens. The first book in the Skybound Saga, Black Wings Beating—which the New York Times Book Review called “brilliantly crafted”—was a NBC Today Show Book Club Pick, a Kirkus Best YA Book of the Year, and received several starred reviews. His young adult debut, Proxy, was an ALA Top Ten Quick Pick for Reluctant Young Readers, a 2014 Best Fiction for Young Adults, a Rainbow List Selection, and appeared on state reading lists across the country. At one time a journalist reporting from conflict zones and refugee camps, Alex lives with his husband in Philadelphia, Pennsylvania.

"Following the battle-heavy Red Skies Falling (2019), this final entry effectively ties up many of the loose threads while maintaining a constant wingbeat of danger and intrigue." —Kirkus Reviews

"Gold Wings Rising wraps up Alex London’s intense, evocative Skybound Saga with a deeply satisfying conclusion that both builds on the established world and subverts its very foundations. Brutal, evocative, and brimming with heart and hope, Gold Wings Rising is a triumph of a final installment." —Tor.com