Son of the Poison Rose: A Kagen the Damned Novel (Paperback) 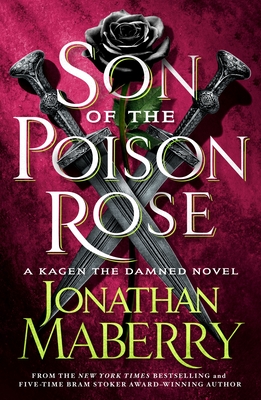 The Silver Empire is in ruins. War is in the wind. Kagen and his allies are on the run from the Witch-king. Wild magic is running rampant everywhere. Spies and secret cabals plot from the shadows of golden thrones.

Kagen Vale is the most wanted man in the world, with a death sentence on his head and a reward for him—dead or alive—that would tempt a saint.

The Witch-king has new allies who bring a terrible weapon—a cursed disease that drives people into a murderous rage. If the disease is allowed to spread, the whole of the West will tear itself apart.

In order to build an army of resistance fighters and unearth magical weapons of his own, Kagen and his friends have to survive attacks and storms at sea, brave the haunted wastelands of the snowy north, fight their way across the deadly Cathedral Mountains, and rediscover a lost city filled with cannibal warriors, old ghosts, and monsters from other worlds. Along with his reckless adventurer brothers, Kagen races against time to save more than the old empire… if he fails the world will be drenched in a tsunami of bloodshed and horror.

Son of the Poison Rose weaves politics and espionage, sorcery and swordplay, treachery and heroism as the damned outcast Kagen fights against the forces of ultimate darkness.