The Girl Who Fell Beneath the Sea (Hardcover) 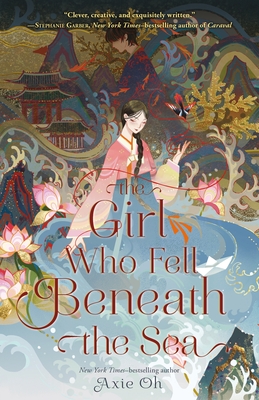 Axie Oh's The Girl Who Fell Beneath the Sea is an enthralling feminist retelling of the classic Korean folktale "The Tale of Shim Cheong," perfect for fans of Wintersong, Uprooted, and Miyazaki’s Spirited Away.

Deadly storms have ravaged Mina’s homeland for generations. Floods sweep away entire villages, while bloody wars are waged over the few remaining resources. Her people believe the Sea God, once their protector, now curses them with death and despair. In an attempt to appease him, each year a beautiful maiden is thrown into the sea to serve as the Sea God’s bride, in the hopes that one day the “true bride” will be chosen and end the suffering.

Many believe that Shim Cheong, the most beautiful girl in the village—and the beloved of Mina’s older brother Joon—may be the legendary true bride. But on the night Cheong is to be sacrificed, Joon follows Cheong out to sea, even knowing that to interfere is a death sentence. To save her brother, Mina throws herself into the water in Cheong’s stead.

Swept away to the Spirit Realm, a magical city of lesser gods and mythical beasts, Mina seeks out the Sea God, only to find him caught in an enchanted sleep. With the help of a mysterious young man named Shin—as well as a motley crew of demons, gods and spirits—Mina sets out to wake the Sea God and bring an end to the killer storms once and for all.

But she doesn’t have much time: A human cannot live long in the land of the spirits. And there are those who would do anything to keep the Sea God from waking…

Praise for The Girl Who Fell Beneath the Sea:

"A beautiful, mesmerizing retelling I wish I’d had when I was growing up. ... A heartfelt tale that I will be recommending for years to come." —Elizabeth Lim, New York Times-bestselling author of Six Crimson Cranes

"A true jewel of a story that shines in the world of fantasy. ... This beautifully woven tale brimming with heart, spirit, and love is a dream you’ll never want to end." —Janella Angeles, bestselling author of Where Dreams Descend

Axie Oh is a first-generation Korean American, born in New York City and raised in New Jersey. She studied Korean history and creative writing as an undergrad at the University of California San Diego and holds an MFA in Writing for Young People from Lesley University. Her passions include K-pop, anime, stationery supplies, and milk tea, and she currently resides in Las Vegas, Nevada, with her dog, Toro (named after Totoro). She is the author of multiple books for teens, including The Girl Who Fell Beneath the Sea.

Praise for The Girl Who Fell Beneath the Sea:

"A true jewel of a story that shines in the world of fantasy. Axie Oh effortlessly brings legends to life in the pages of this lush, powerful retelling of the Korean folktale of Shim Cheong that will sweep readers off their feet and transport them to an unforgettable, whimsical world filled with characters they’ll be yearning to revisit for years to come. This beautifully woven tale brimming with heart, spirit, and love is a dream you’ll never want to end." —Janella Angeles, bestselling author of Where Dreams Descend

"Lyrical prose, incredible world building, and a heroine worth rooting for—this story is everything and then some. A stunning feat of storytelling and an un-put-downable read. ... Absolutely exquisite!" —Kalynn Bayron, bestselling author of Cinderella Is Dead and This Poison Heart

"Get ready to be swept into a world of gods, spirits, surprising twists, and mingled destinies. The Girl Who Fell Beneath the Sea is a breathtaking cinematic fairy tale with a courageous heroine at its heart." —Traci Chee, New York Times-bestselling author of The Reader and We Are Not Free

"A clever, creative, and exquisitely written tale of sacrifice, love, and fate. The Girl Who Fell Beneath the Sea is one part breathless adventure, one part fantasy romance, and entirely enchanting." —Stephanie Garber, New York Times-bestselling author of Caraval

"A beautiful, mesmerizing retelling I wish I’d had when I was growing up. Axie Oh seamlessly weaves Korean mythology with her own voice, and gifts the reader with a heartfelt tale that I will be recommending for years to come." —Elizabeth Lim, New York Times-bestselling author of Six Crimson Cranes

"Based on a classic Korean folktale, this enchanting novel brings a realm of gods, spirits, demons and dragons to rich life. ... A journey of both heart and spirit. With its captivating world-building, fast-paced story and cast of memorable characters, The Girl Who Fell Beneath the Sea will charm, delight and surprise readers." —Juliet Marillier, award-winning author of the Warrior Bards series

"A sumptuous fairytale world to dive into full of whimsy and heart. Perfect for fans of Studio Ghibli!" —Natasha Ngan, New York Times-bestselling author of Girls of Paper and Fire

"This brilliant retelling of Korea's most famous legend preserves the beloved classic while empowering Shim Cheong for a modern audience. Oh's fantastical world is unique and absolutely mesmerizing. I adored absolutely everything about it!" —Ellen Oh, editor and co-author of A Thousand Beginnings and Endings

"[A] majestic magical marvel of a book." —Buzzfeed

"Nicely paced and beautifully written, this engrossing fantasy is packed with memorable characters, starting with the headstrong Mina, and including the mysterious Shin, with whom she becomes inexplicably tied. ... A perfect for fit readers who love Spirited Away." —Booklist

"The novel boasts a plucky heroine, heart-tugging family relationships, and a fraying, compellingly fraught relationship between gods and the mortal world. ... The draw here for most readers will be the fascinatingly detailed spirit world and Oh’s riffs on the Shim Cheong legend; fans of supernatural K-dramas and Lim’s Six Crimson Cranes will eat it up." —The Bulletin

"Oh weaves an intricate and engaging tale. ... Captivated readers will long to be pulled deeper into the story. A fantastical world to get lost in." —Kirkus Reviews

"This action-packed sci-fi novel, with deeper explorations of empathy, humanity, and the capacity to love, is a great choice." —School Library Journal, starred review