Against the Paw: A Paw Enforcement Novel (Paperback) 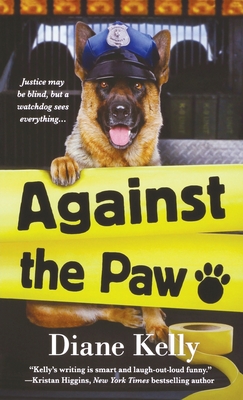 This is book number 4 in the A Paw Enforcement Novel series.

Police officer Megan Luz and her K-9 partner are on the lookout for a convict who has been unleashed. . .

PAW PATROL IS ON THE CASE
Megan has her sights set on finding a convicted burglar who’s broken his parole, and she has the perfect partner to help sniff him out. Unfortunately, her shepherd-mix Brigit’s dog bowl is already full. A Peeping Tom has been spotted in an affluent Fort Worth neighborhood—and concerned citizens are looking for a few good watchdogs…

TO COLLAR A CRIMINAL
To catch the creep, residents start enlisting volunteers to beef up their Neighborhood Watch group. Which is fine with Megan. She needs to focus on catching a burglar who’s still at large. But when the Peeping Tom patrol grows into a virtual vigilante mob, Megan and Brigit have to jump in paws first—before some very angry people take the law into their own hands…

Against the Paw is the fourth book in Diane Kelly's series featuring Fort Worth Police officer Megan Luz and her K-9 dog partner Brigit.