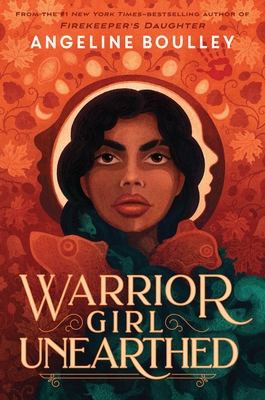 #1 New York Times bestselling author of Firekeeper's Daughter Angeline Boulley takes us back to Sugar Island in this high-stakes thriller about the power of discovering your stolen history.

Perry Firekeeper-Birch has always known who she is - the laidback twin, the troublemaker, the best fisher on Sugar Island. Her aspirations won't ever take her far from home, and she wouldn't have it any other way. But as the rising number of missing Indigenous women starts circling closer to home, as her family becomes embroiled in a high-profile murder investigation, and as greedy grave robbers seek to profit off of what belongs to her Anishinaabe tribe, Perry begins to question everything.

In order to reclaim this inheritance for her people, Perry has no choice but to take matters into her own hands. She can only count on her friends and allies, including her overachieving twin and a charming new boy in town with unwavering morals. Old rivalries, sister secrets, and botched heists cannot - will not - stop her from uncovering the mystery before the ancestors and missing women are lost forever.

Angeline Boulley, an enrolled member of the Sault Ste. Marie Tribe of Chippewa Indians, is a storyteller who writes about her Ojibwe community in Michigan's Upper Peninsula. She is a former Director of the Office of Indian Education at the U.S. Department of Education. Angeline lives in southwest Michigan, but her home will always be on Sugar Island. Firekeeper's Daughter is her debut novel.

Soon to be adapted at Netflix for TV with President Barack Obama and Michelle Obama's production company, Higher Ground.

“One of this year's most buzzed about young adult novels.” ―Good Morning America

"Intricate and moving. Boulley takes the reader on an incredible journey with the assurance of a veteran novelist." ―Tochi Onyebuchi, award-winning author of Beasts Made of Night and Riot Baby

“A rare and mesmerizing work that blends the power of a vibrant tradition with the aches and energy of today’s America. This book will leave you breathless!” ―Francisco X. Stork, acclaimed author of Marcelo in the Real Worldand Illegal

"A crime suspense fiction [with] a lot of layers, Indigenous culture, and it's really beautifully written." ―Georgia Hardstark, co-host of My Favorite Murder podcast

"[An] absolute powerhouse of a debut." ―NPR

“Another YA novel that’s absolutely page-turning required reading for adults...Our heroine is so smart, so thoughtful, and so good.” ―Glamour

"Raw and moving. . . Boulley has crafted a nuanced and refreshing protagonist." ―Cosmopolitan

"A gorgeous insight into Anishinaabe culture and a page-turning YA thriller with a healthy dose of romance thrown in,Firekeeper’s Daughter hits all of the right notes." ―Hypable

"Immersive and enthralling, Firekeeper’s Daughter plunges the reader into a community and a landscape enriched by a profound spiritual tradition. Full of huge characters and spellbinding scenes, it gives a fascinating insight into life on and off the reservation, with Daunis as a tough and resourceful heroine through every vicissitude." ―Financial Times

"Hitting hard when it comes to issues such as citizenship, language revitalization, and the corrosive presence of drugs on Native communities, this novel will long stand in the hearts of both Native and non-Native audiences." ―Publishers Weekly, Starred Review

"Though Firekeeper’s Daughter contains gripping action sequences and gasp-inducing twists, it’s Daunis’ mission of self-discovery, which begins as a low and steady growl and grows to a fierce, proud roar, that has the most impact... Though it both shocks and thrills, in the end, what leaves you breathless is Firekeeper’s Daughter’s blazing heart." ―BookPage, Starred Review

"Boulley, herself an enrolled member of the Sault Ste. Marie Tribe of Chippewa Indians, writes from a place of love for her community and shares some key teachings from her culture, even mixing languages within the context of the story. She doesn't shy away from or sugar-coat the very real circumstances that plague reservations across the country, and she tackles these through her biracial hero who gets involved in the criminal investigation into the corruption that led to this pain. An incredible thriller, not to be missed." ―Booklist, Starred Review