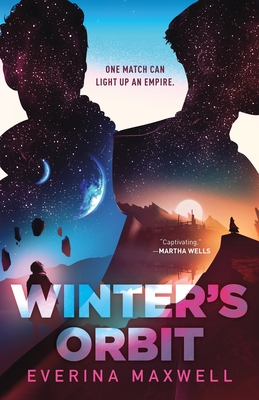 When Count Jainan’s husband, Prince Taam, dies unexpectedly, the Empire’s tenuous hold on their vassal planets begins to fracture, just weeks before the renewal of a treaty that will see them through another 20 years of stability. Enter Prince Kiem, the charming, charismatic, and absolutely disappointing royal substitute called upon by the Emperor to do his duty and keep the Empire intact. When Jainan and Kiem are tied together in a politically convenient marriage, neither expects it to be anything other than an impersonal arrangement, but soon they’re both embroiled in political schemes and top secret investigations while the fates of their planets hang in the balance. And soon enough, their ‘politically convenient marriage’ becomes much more than they bargained for. Winter’s Orbit is a space opera that is mischievous, touching, and suspenseful in turn - from somber beginning to gleeful end, it is altogether delightful.

Prince Kiem, a famously disappointing minor royal and the Emperor's least favorite grandchild, has been called upon to be useful for once. He's commanded to fulfill an obligation of marriage to the representative of the Empire's newest and most rebellious vassal planet. His future husband, Count Jainan, is a widower and murder suspect.

Neither wants to be wed, but with a conspiracy unfolding around them and the fate of the empire at stake they will have to navigate the thorns and barbs of court intrigue, the machinations of war, and the long shadows of Jainan's past, and they'll have to do it together.

So begins a legendary love story amid the stars.

“High-pitched noises escaped me; I shouted, more than once, 'Now kiss!' ... in a world so relentlessly uncertain, there’s a powerfully simple pleasure in the experience of a promise kept.” —The New York Times Book Review

EVERINA MAXWELL is the author of Winter’s Orbit. She lives and works in Yorkshire, where she collects books and kills houseplants.

“High-pitched noises escaped me; I shouted, more than once, 'Now kiss!' ... in a world so relentlessly uncertain, there’s a powerfully simple pleasure in the experience of a promise kept.” —The New York Times Book Review

“[Winter's Orbit features] that compelling dynamic best summed up as 'the grumpy one' (Jainan) and 'the sunshine one' (Kiem)... This is fertile ground for the tropiest of misunderstandings, compounded by our heroes' own self-loathing baggage.... when these sensitive boys figure out what actually makes their match work, that's when sparks fly.” —NPR

“Delightful! Winter's Orbit is a chilling account of a dark past wrapped in the warm blanket of a promising future. It was such a pleasure to read.” —Ann Leckie, New York Times bestselling author of the Hugo, Nebula, and Arthur C. Clarke Award-winning novel Ancillary Justice

“As romantic as it is suspenseful....this book will be hard to put down.” —Popsugar

“A deftly woven tale of political intrigue, all with a galactic treaty on the line. Maxwell's Winter's Orbit is a stunning new space opera debut, striking with all the skill of a master staff wielder. I hope there is more Kiem and Jainan to come!” —K.B. Wagers, author of Out Past the Stars

"A dazzling and comforting story of galactic politics, healing and romance. Its characters stayed with me long after I raced through the last chapters." —Aliette de Bodard, Nebula Award-winning author of The Tea Master and the Detective

“A fun, sexy space adventure with protagonists that made me laugh out loud. I devoured it.” —S. A. Chakraborty, bestselling author of The City of Brass

“At the heart of Winter's Orbit is an argument about healing, honesty, and the nature of trust and power. Well-paced and deftly written, it's one of the most enjoyable space (or planetary) opera romances that I've had the pleasure to read, and I look forward to seeing more of Maxwell's work in the years to come.” —Locus

"Winter's Orbit manages the incredible feat of being the slow burn 'sad spaceboys in love' romance of your dreams, while also being a gripping political thriller. Maxwell has built a deeply-layered and fascinating universe filled with alien tech, complex imperial politics, and perilous intergalactic diplomacy. I stayed up all night reading, desperately rooting for Kiem and Jainan to finally hold hands and save the day." —Lina Rather, author of Sisters of the Vast Black

“A captivating love story with engaging characters, wrapped around a murder mystery with high-stakes multi-world politics. Winter’s Orbit reminds me in the best way of the Vorkosigan series by Lois McMaster Bujold. I can’t wait to see what Maxwell does next!” —Martha Wells, New York Times bestselling author of the Hugo, Nebula, Alex, and Locus Award-winning Murderbot Diaries

"Everina Maxwell's writing has everything you could ask: impossible choices, divided loyalties, dry wit, and operatic struggle with bureaucracy. I don't know how she's managed to write a book that's simultaneously an elegant comedy of manners, a charming slow-burn romance, and an adventure in space politics, but whatever her secret, I'm wildly envious." —A. K. Larkwood, author of The Unspoken Name

"Everina Maxwell is brilliant at creating atmosphere and drama. Her light touch and considering eye are applied thoughtfully, warmly, and yet without mercy to the failures of an interstellar bureaucracy and the people who both make those failures happen; to the difficulties of diplomatic ties between planets that rely on personal ties between human beings; to the ways people try to get what they want from each other, and the ways they fail to understand each other. The combination of sweeping space opera backdrop and real human drama is as compelling as it comes." —Emily Tesh, author of Silver in the Wood

“Everina Maxwell’s debut novel, Winter’s Orbit, is anything but frigid. This queer science fiction romance astounds not only through its believable, multilayered character development, but also in the eons of intergalactic political and cultural history.” —Bookpage

“This exciting adventure is sure to win Maxwell many fans.” —Publishers Weekly

“Suggest this to fans of Katherine Addison’s The Goblin Emperor (2014) or N. K. Jemisin’s The Hundred Thousand Kingdoms (2010). Recommended for teens who enjoy exciting romantic adventures with some soft science fiction elements, especially those looking for LGBTQ representation.” —Booklist