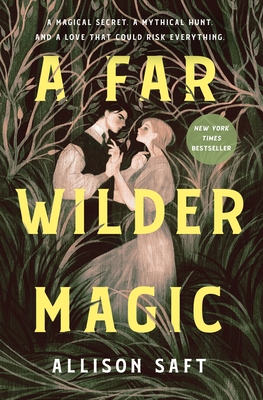 “Allison Saft’s writing drips with color and paints a world so real you feel like you can touch it. A thrilling adventure full of magic and danger reminiscent of Fullmetal Alchemist, A Far Wilder Magic is a story you won’t put down.”
— Marielle Orff, Towne Book Center & Cafe, Collegeville, PA

"An utterly transportive read, unfolding into a world of crumbling manors and ancient forests. Allison Saft crafts a deliberate, intricate romance that will have you as unmoored as the characters." —Chloe Gong, New York Times bestselling author of These Violent Delights

A romantic YA fantasy perfect for fans of Erin A. Craig and Margaret Rogerson, about two people who find themselves competing for glory—and each other's hearts—in a magical fox hunt.

When Margaret Welty spots the legendary hala, the last living mythical creature, she knows the Halfmoon Hunt will soon follow. Whoever is able to kill the hala will earn fame and riches, and unlock an ancient magical secret. While Margaret is the best sharpshooter in town, only teams of two can register, and she needs an alchemist.

Weston Winters isn’t an alchemist—yet. He's been fired from every apprenticeship he's landed, and his last chance hinges on Master Welty taking him in. But when Wes arrives at Welty Manor, he finds only Margaret. She begrudgingly allows him to stay, but on one condition: he must join the hunt with her.

Although they make an unlikely team, they soon find themselves drawn to each other. As the hunt looms closer and tensions rise, Margaret and Wes uncover dark magic that could be the key to winning the hunt—if they survive that long.

In A Far Wilder Magic, Allison Saft has written an achingly tender love story set against a deadly hunt in an atmospheric, rich fantasy world that will sweep you away.

"Innovative, romantic, and intoxicating. A Far Wilder Magic is a diamond of the YA fantasy genre, with a fresh and artfully layered world and extraordinary characters to match." —Amanda Foody, author of Ace of Shades

Allison Saft is the author of the eerie and critically acclaimed romantic fantasies, Down Comes the Night and A Far Wilder Magic. After receiving her MA in English literature from Tulane University, she moved from the Gulf Coast to the West Coast, where she spends her time hiking the redwoods and practicing aerial silks.

EPIC READS, "Most Anticipated 2022 YA Books"

THE NERD DAILY, "72 Upcoming YA Book Releases To Add To Your TBR"

UNITED BY POP, "60+ Anticipated 2002 YA Releases From January to June"

“Much like Shadow and Bone, A Far Wilder Magic by Allison Saft features a land consumed by anti-immigration and antisemitic thought. At its core is a tradition: a hunt for a magical beast. For anyone wanting a romantic fantasy storyline, this one is between a sharpshooter and an alchemist.” —Buzzfeed

“If simmering romance between two people with their walls all the way up is your jam, then this book will win your heart…When they eventually let each other in, it’s as satisfying as these things get. …Romantic but not romanticized, A Far Wilder Magic suggests that the true quest isn't hunting the mythical beast, it's finding the truth within yourself.” —NPR.org

"Deeply entrancing. Teeming with magic and alchemy, A Far Wilder Magic is an utterly transportive read, unfolding into a world of crumbling manors and ancient forests. Allison Saft crafts a deliberate, intricate romance that will have you as unmoored as the characters." —Chloe Gong, New York Times bestselling author of These Violent Delights

"Saft's writing drips with color and paints a world so real you feel like you can touch it. A thrilling adventure full of magic and danger reminiscent of Fullmetal Alchemist, A Far Wilder Magic is a story you won't put down." --Shelf Awareness

“[A] book that will strike a chord with younger fans of aesthetics like dark academia and dark naturalism. This novel filled my mind with images of foggy forests, decrepit Victorian mansions and luminant silver cryptids.... There’s something in this novel for everyone, a must-read for fans of gothic literature, natural fantasy and YA fantasy alike.” —BookTrib

“A consuming character-driven read, A Far Wilder Magic is an enchanting YA fantasy romance about family, finding yourself, and falling in love. Highly recommend for fans of Cold the Night, Fast the Wolves and The White Stag.” —YA Books Central

"Saft skillfully engineers an odd pair that are forced to work together. This standalone will definitely hook readers who like a little enemies-to-friends in their romances." —Booklist

"This atmospheric, emotionally driven story focuses on the slow-burn romance between two outcasts who yearn to belong and who face discrimination for their cultural and religious backgrounds. Deeply romantic and utterly magical." —Kirkus

"Wes and Margaret's unfolding romance is subtle and satisfying, and Saft's prose is vivid and dryly humorous. Fans of Leigh Bardugo's original Shadow & Bone trilogy will likely enjoy this honest, evocative romance." —Bulletin of the Center for Children's Books

"Please know that what I’m about to say, I don’t say often: A Far Wilder Magic felt so original, and it was so good to read. Reading this was like breaking open freshly baked bread—both comforting and complex at the same time. Allison Saft has crafted a romantic fantasy with a genuinely swoon-worthy male lead, and the enemies to begrudging partners to lovers storyline is based on mutual respect and a real connection. It’s about family and belonging, loneliness, and finding ones own path. And it’s just a delight through and through." —Tor.com, "The 30 Most Anticipated SFF Books of 2022"

“Reading A Far Wilder Magic, I smelled the gunpowder and felt the fog creeping between the redwoods as fall brought the Halfmoon Hunt to New Albion. Saft’s second novel is a captivating story of family, alchemy, and love centered around two marginalized characters who dare to compete for their dreams in a world that has never given them a chance. The romance and the hunt kept my heart racing from beginning to end. Absolutely riveting.” —Audrey Coulthurst, author of Of Ice and Shadows

"Innovative, romantic, and intoxicating. A Far Wilder Magic is a diamond of the YA fantasy genre, with a fresh and artfully layered world and extraordinary characters to match. This is dual narrative at its finest." —Amanda Foody, author of Ace of Shades

"With its lush 1920s-inspired world and heart-wrenchingly human characters, A FAR WILDER MAGIC will leave readers spellbound as they join Margaret and Wes on the hunt of a lifetime. Saft's detailed alchemical system and rich, lyrical prose bring this dark fantasy to life, crafting a tale of perseverance and passion that will linger with readers long after they reach the final page." —Aden Polydoros, author of The City Beautiful

"Tender, intimate, and atmospheric, yet written with a taut propulsion that bewitches and compels you, A Far Wilder Magic is unlike anything on the YA shelf. Wes and Margaret are by turns charming and infuriating, drawn together by a shared desire to find their home in a bewildering and forbidding world. With devastatingly gorgeous prose, intricate worldbuilding, and an utterly original plot, Saft weaves a love story that will tear you apart and then stitch you whole again." —Ava Reid, author of The Wolf & The Woodsman

“A lovely romance between two characters who are considered outsiders by society at large.” — School Library Journal