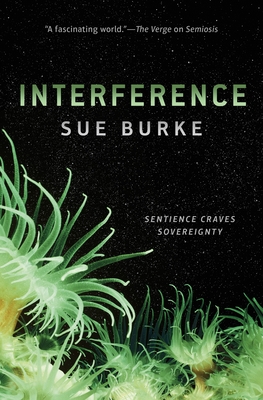 This is book number 2 in the Semiosis Duology series.

Sue Burke's sweeping, award-finalist, SF Semiosis epic continues in Interference as the colonists and a team from Earth confront a new and more implacable intelligence.

Over two hundred years after the first colonists landed on Pax, a new set of explorers arrives from Earth on what they claim is a temporary scientific mission.

But the Earthlings misunderstand the nature of the Pax settlement and its real leader. Even as Stevland attempts to protect his human tools, a more insidious enemy than the Earthlings makes itself known.

Stevland is not the apex species on Pax.

SUE BURKE spent many years working as a reporter and editor for a variety of newspapers and magazines. She is a Clarion workshop alumnus, and she has published more than 30 short stories. Her debut science fiction novel, Semiosis, published to great critical reviews and made several "Best Of" lists. She is also the author of Interference and Immunity Index.

“Interference is as good as Semiosis, which is no small feat for the sequel of a book whose strength lay in its thought-provoking concepts. Like Ann Leckie's Ancillary Justice, Sue Burke elevated a good story with a great idea.”—SFRevu

Praise for Semiosis
“This is up there with Ursula K. Le Guin: science fiction at its most fascinating and most humane.“—Thrillist

“A magnetic meditation on biochemistry and humanity.”—Locus Online

“Sharp, evocative . . . Semiosis unfolds the old science fiction idea of first contact in ways that are both traditional and subversive.”—The Christian Science Monitor

"Burke’s world building is exceptional, and her ability to combine the intricacies of colonization with the science of botany and theories of mutualism and predation is astounding." —Booklist

“A fresh and fun perspective on planetary exploration.”—The Bibliosanctum (4 out of 5 stars)

“A fresh and thought-provoking take.”—Open Letters

“This is top class SF, intelligent and engaging and I loved every moment of it.”—Adrian Tchaikovsky, winner of the Arthur C. Clarke Award for Children of Time

“In Semiosis, Sue Burke blends science with adventure and fascinating characters, as a human colony desperately seeks to join the ecosystem of an alien world.” —David Brin, author of Earth and Existence.

“A first contact novel like none you’ve ever read. . . . The kind of story for which science fiction was invented.” —James Patrick Kelly, winner of the Hugo, Nebula and Locus awards

“Sue Burke has created one of the most fascinating alien personae science fiction has seen in this decade.” –David Nichols, early American historian and author of Engines of Diplomacy

“A gripping story of colonization and biological wonders.”—Gregory Frost, author of the Shadowbridge novels

“A fantastic SF debut . . . Semiosis will remain relevant for years to come.” —Prof. Daniel Chamovitz, award-winning author of What a Plant Knows and Director of the Manna Center for Plant Biosciences at Tel Aviv University.