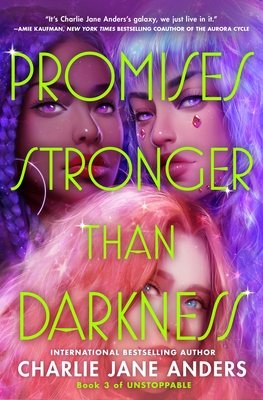 This is book number 3 in the Unstoppable series.

They're the galaxy's most wanted—and our only hope.

When Elza became a space princess, she thought she'd be spending her time at the palace, wearing gorgeous couture and soaking up everything there is to know—but instead, she's on the run, with everyone hunting for her and her friends.

Rachael followed her best friend Tina on the adventure of a lifetime—but now Tina's gone, and Rachael's the only one keeping her friends together, as they go on a desperate quest to save everyone from an ancient curse.

Rachael, Elza and their friends have found one clue, one shining mysterious chance to stop the end of the world. And that takes them back to the second-to-last place they'd want to be: enlisting the aid of Captain Thaoh Argentian, the woman who stole Tina's body (and who now seems to be relishing a second chance at teenage chaos and drama, instead of living up to her legacy of an intrepid heroic commander).

With only a ragtag band of misfits, crewmates, earthlings, friends, lovers (and one annoying frenemy), the Unstoppable Crew are up against the universe--and they soon find that in order to survive, they may have to cross a line they vowed never to cross.

Charlie Jane Anders is the author of Victories Greater Than Death, the first book in the young-adult Unstoppable trilogy, along with the short story collection Even Greater Mistakes. Her other books include The City in the Middle of the Night and All the Birds in the Sky. Her fiction and journalism have appeared in The New York Times, The Washington Post, Slate, McSweeney's, Mother Jones, the Boston Review, Tor.com, Tin House, Conjunctions, Wired Magazine, and other places. Her TED Talk, "Go Ahead, Dream About the Future" got 700,000 views in its first week. With Annalee Newitz, she co-hosts the podcast Our Opinions Are Correct.