Once You Go This Far: A Mystery (Roxane Weary #4) (Hardcover) 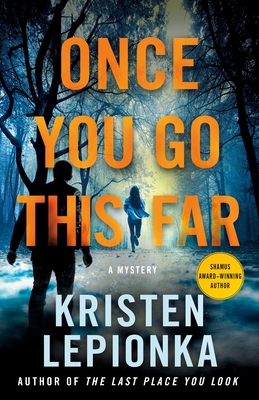 This is book number 4 in the Roxane Weary series.

Once You Go This Far is the fourth thrilling mystery from Shamus Award-winning and Anthony and Macavity Award-nominated author Kristen Lepionka.

Junior-high school nurse Rebecca Newsome was an experienced hiker—until she plummeted to her death at the bottom of a ravine in a Columbus metro park. Her daughter, Maggie, doesn't believe it was an accident, and Rebecca's ex-husband is her prime suspect. But he's a well-connected ex-cop and Maggie is certain that's the reason no one will listen to her. PI Roxane Weary quickly uncovers that the dead woman's ex is definitely a jerk, but is he a murderer?

As she pieces together the days before Rebecca died, what Roxane finds doesn't quite add up. From a series of trips to Detroit and across the border to a casino in Windsor, Canada, to strange calls from Rebecca's home to a charismatic political candidate, to a women's health organization, to a secretive church group that seems to have more information about its members than it should, Roxane needs to figure out how everything is connected before a dangerous secret gets someone else killed.

KRISTEN LEPIONKA is the Shamus Award-winning and Anthony and Mcavity Award-nominated author of The Last Place You Look and What You Want to See. She grew up mostly in her local public library, where she could be found with a big stack of adult mysteries before she was out of middle school. She is a co-founder of the feminist podcast Unlikeable Female Characters, and she lives in Columbus, Ohio, with her partner and two cats.

"Roxane is an increasingly compelling lead character, her fallibility balanced by her self-awareness and persistence."--Booklist (starred review)

"Read this one and see if it doesn’t send you scurrying in search of the previous three books in Lepionka’s series." --Bookpage

"Weary is someone you root for, and her grit and determination when working a case is the real draw here." --Bookbub

Praise for the Roxane Weary Mysteries:

"Kristen Lepionka and Roxane Weary are the best things to happen to the genre in years." —Laura Lippman, New York Times bestselling author

"Lepionka is setting a high standard for crime fiction with the complex Roxane Weary at its heart." —Booklist