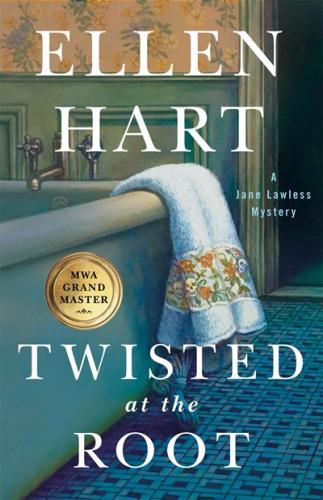 This is book number 26 in the Jane Lawless Mysteries series.

Mystery Writers of America Grandmaster Ellen Hart’s intimate storytelling returns in Twisted at the Root, where Hart’s latest mystery shows the importance of finding the truth.

Everyone thought Rashad May and Gideon Wise were happily married. That is, until Rashad was convicted of his husband’s murder.

Four years later, Rashad’s brother contacts Ray Lawless – Minnesota private investigator Jane Lawless’s father and the original defense attorney on the case – with potential evidence of a wrongful conviction. When the case is reopened, Jane and her father must work together to attain justice for a grieving widower.

Who actually killed Gideon and why? There are suspects and motives galore, and Jane must discover the truth. She must also track down her missing brother, Peter, who was involved in the original trial, and who might be hiding secrets of his own.

Praise for Twisted at the Root

“Hart uses the characters introduced in this installment of her long-running series to ramp up the creepiness.” —Kirkus Reviews

“This intricately plotted mystery is filled with a cast of lying characters . . . it's obvious why Mystery Writers of America named her a Grand Master.” —Library Journal

“Hart excels at making even ancillary characters fully realized. The prose is top notch and the plot complex and air-tight. The identity of the killer will come as a surprise to even the hard-core mystery aficionados. Another solid addition to Hart’s long-running series.” —The Prairies Book Review

"Jane Lawless is truly a classic detective for the ages." —Aunt Agatha's

Praise for Ellen Hart and The Jane Lawless Series

“Hart, the veteran crime writer, presents her central character, Jane Lawless, with such consistent and off-handed good humour that readers hardly notice the trails she and her character have blazed.” — The Toronto Star

“A good mystery engages our moral imaginations. Hart always has done this well through the diverse mix of gay and non-gay characters that populate her fictional world and the meaningful contemporary themes they confront.” —Minneapolis Star-Tribune

“Arguably one of the best lesbian mystery writers out there.” — The Advocate