Tell Me How You Really Feel (Hardcover) 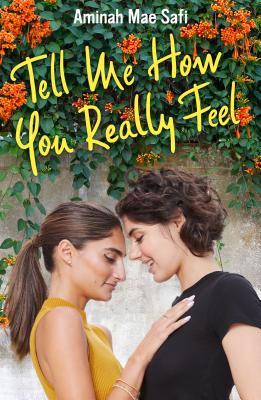 If you made Rory Gilmore a Persian-American cheerleader with med school ambitions, and Paris Geller an aspiring Mexican-Jewish filmmaker, added a heaping dose of attraction and set it in Los Angeles, you would get Aminah Mae Safi’s wonderful YA rom-com, Tell Me How You Really Feel. Safi dedicated her book to Amy Sherman-Palladino so it’s fair to say that she wrote her characters with The Gilmore Girls in mind.

Sana Khan has strived for perfection her entire life. She is about to get everything she has ever worked for but can’t bring herself to mail in her deposit to Princeton, her dream school. Rachel Recht terrifies everyone who crosses her path and is relentless in her ambitions. Through a series of mishaps, she is forced to cast her nemesis Sana in her final film project. Loathing, then respect, and eventually searing attraction develop between Sana and Rachel and their relationship forces them to question everything they’ve always believed. Told from dual perspectives, and crackling with charm and winning characters, this is the perfect summer read.

Aminah Mae Safi's Tell Me How You Really Feel is an ode to romantic comedies, following two girls on opposite sides of the social scale as they work together to make a movie and try very hard not to fall in love.

The first time Sana Khan asked out a girl–Rachel Recht--it went so badly that she never did it again. Rachel is a film buff and aspiring director, and she’s seen Carrie enough times to learn you can never trust cheerleaders (and beautiful people). Rachel was furious that Sana tried to prank her by asking her on a date.

But when it comes time for Rachel to cast her senior project, she realizes that there’s no more perfect lead than Sana--the girl she's sneered at in the halls for the past three years. And poor Sana--she says yes. She never did really get over that first crush, even if Rachel can barely stand to be in the same room as her.

Told in alternative viewpoints and set against the backdrop of Los Angeles in the springtime, when the rainy season rolls in and the Santa Ana's can still blow--these two girls are about to learn that in the city of dreams, anything is possible--even love.

Aminah Mae Safi is a Muslim-American writer. Safi was the winner of the We Need Diverse Books short story contest, and that story appears in the anthology Fresh Ink. She lives in Los Angeles, California, with her partner and cat.