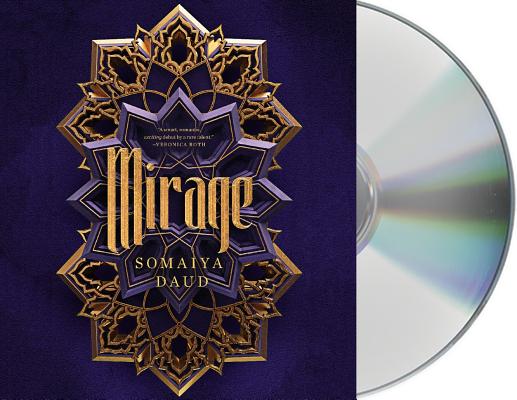 This is book number 1 in the Mirage Series series.

“Amani is stolen from her home on the moon of Cadiz and forced to serve as the princess's double for the heartless Vathek, usurpers of her people. With her life at stake, Amani must now learn how to think and act like her enemies while trying to keep true to her own people's outlawed customs and beliefs — and to herself. Whereas some young women might become depressed and lose hope in the face of such a loss of control, Amani boldly embraces her new circumstances with a rare surety; she waits, and she plans. The narration is poetic, the worldbuilding beautifully crafted. This Moroccan-influenced fusion of fantasy and science fiction is a positively stunning debut novel.”
— Leah Atlee, Changing Hands, Tempe, AZ

“Mirage is full of characters who feel like they existed long before the story began, and a rich world that is as beautiful as it is cruel. Somaiya Daud is a rare talent. A smart, romantic, exciting debut.” —Veronica Roth, #1 New York Times bestselling author of Divergent and Carve the Mark

A stunning epic fantasy audiobook inspired by the author’s Moroccan heritage about a poor girl who must become the body double of a princess of a ruthless empire hailed as ”a rich, dazzling, powerful debut” by Tahereh Mafi, the New York Times author of the Shatter Me series

In a world dominated by the brutal Vathek empire, eighteen-year-old Amani is a dreamer. She dreams of what life was like before the occupation; she dreams of writing poetry like the old-world poems she adores; she dreams of receiving a sign from Dihya that one day, she, too, will have adventure, and travel beyond her isolated home.

But when adventure comes for Amani, it is not what she expects: she is kidnapped by the regime and taken in secret to the royal palace, where she discovers that she is nearly identical to the cruel half-Vathek Princess Maram. The princess is so hated by her conquered people that she requires a body double, someone to appear in public as Maram, ready to die in her place.

As Amani is forced into her new role, she can’t help but enjoy the palace’s beauty—and her time with the princess’ fiancé, Idris. But the glitter of the royal court belies a world of violence and fear. If Amani ever wishes to see her family again, she must play the princess to perfection...because one wrong move could lead to her death.

"MIRAGE reads as an impossible trick of the light, a feather that carves words into stone, a banquet of longing and loss. Every page comes roaring to life in a way that overwhelms and transforms you. This isn't a debut novel so much as an heirloom, and the work of a master storyteller." — Margaret Stohl, #1 New York Times bestselling author Beautiful Creatures & Black Widow: Forever Red

"With its breathtaking worldbuilding and characters who grabbed me from the first page, Mirage is by turns thrilling and ruminative, sexy and heartbreaking. Somaiya Daud has written a moving and unforgettable debut." — Sabaa Tahir, New York Times bestselling author of An Ember in the Ashes

"Prepare to be transported to a whole new world by this powerful, captivating YA audiobook. Narrator Rasha Zamamiri weaves family, politics, romance, and science fiction into a beautifully delivered story of adventure and intrigue...A mesmerizing coming-of-age story, this is a must-listen." -AudioFile