Servant of the Crown (The Dragonslayer #3) (CD-Audio) 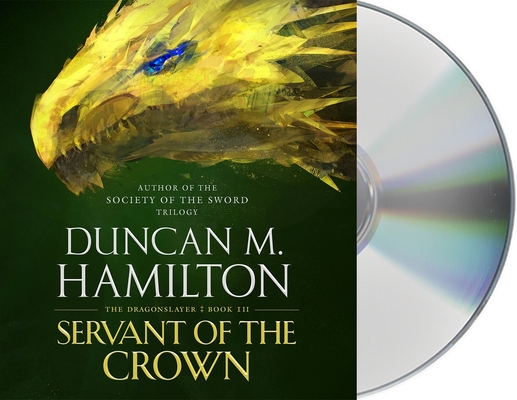 This is book number 3 in the The Dragonslayer series.

The Exciting Conclusion to the Dragonslayer Trilogy

Long laid plans finally bear fruit, but will it prove as sweet as hoped for? With the king on his deathbed, the power Amaury has sought for so long is finally in his grasp.

As opposition gathers from unexpected places, dragonkind fights for survival and a long-awaited reckoning grows close.

Soléne masters her magic, but questions the demands the world will make of her. Unable to say no when the call of duty comes, Gill realizes that the life he had given up on has not given up on him.

The Dragonslayer Trilogy:
1. Dragonslayer
2. Knight of the Silver Circle
3. Servant of the Crown

Duncan M. Hamilton holds Master's Degrees in History and Law, and has practiced as a barrister. He lives in Ireland, near the sea. Hamilton’s debut novel, The Tattered Banner, first of the Society of the Sword trilogy, was named one of BuzzFeed's 12 Greatest Fantasy Books Of The Year in 2013. That book was followed by The Huntsman’s Amulet and The Telastrian Song, and by Wolf of the North, a Norse-inspired fantasy trilogy.

Simon Vance is the critically acclaimed narrator of approximately 400 audiobooks, winner of 27 AudioFile Earphones Awards, and a 12-time Audie Award-winner. He won an Audie in 2006 in the category of Science Fiction and was named the 2011 Best Voice in Biography and History and in 2010 Best Voice in Fiction by AudioFile magazine.

Vance has been a narrator for the past 25 years, and also worked for many years as a BBC Radio presenter and newsreader in London.  Some of his best-selling and most praised audiobook performances include Stieg Larsson’s The Girl with the Dragon Tattoo, Hilary Mantel’s Bring Up the Bodies (an Audie award-winner), Ian Fleming’s Casino Royale, Oscar Wilde’s The Picture of Dorian Gray, Patrick O’Brian’s Master and Commander series (all 21 titles), the new productions of Frank Herbert’s original Dune series, and Rob Gifford’s China Road (an AudioFile 2007 Book of the Year). Vance lives near San Francisco with his wife and two sons.