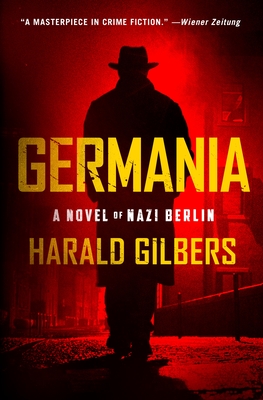 From international bestselling author Harald Gilbers comes the heart-pounding story of Jewish detective Richard Oppenheimer as he hunts for a serial killer through war-torn Nazi Berlin in Germania.

Berlin 1944: a serial killer stalks the bombed-out capital of the Reich, preying on women and laying their mutilated bodies in front of war memorials. All of the victims are linked to the Nazi party. But according to one eyewitness account, the perpetrator is not an opponent of Hitler's regime, but rather a loyal Nazi.

Jewish detective Richard Oppenheimer, once a successful investigator for the Berlin police, is reactivated by the Gestapo and forced onto the case. Oppenheimer is not just concerned with catching the killer and helping others survive, but also his own survival. Worst of all, solving this case is what will certainly put him in the most jeopardy. With no choice but to further his investigation, he feverishly searches for answers, and a way out of this dangerous game.

HARALD GILBERS, born 1970, studied English and history in Augsburg and Munich. He was a television editor before becoming a director for the theater. Germania, his first novel, has been awarded the Glauser Prize for the best crime debut. In 2016 his novel Odins Shne (Odins Sons) was awarded the French Prix Historia and was shortlisted for the Festival Polar Cognac Prize for the best international novel.

"[A] stellar debut...Gilbers makes Oppenheimers fears, and the moral compromises he makes, palpable. Philip Kerr fans will want to check this out." -Publishers Weekly (starred)

"Atmosphere is the real draw here, and the novel splendidly evokes Berlin in ruins and the fall of the Nazis...the tantalizingly open-ended finale suggests that Oppenheimer will have more opportunity to grow in later volumes." -Booklist