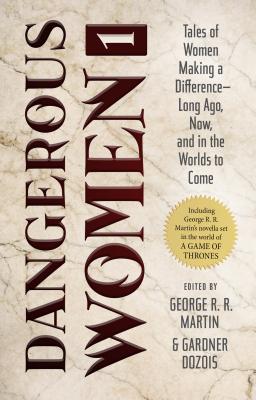 Now in a special pocket-sized hardcover gift edition, Dangerous Women Vol. 1, edited by George R. R. Martin and Gardner Dozois, features George R. R. Martin's "The Princess and the Queen," a 35,000-word original novella set in the world of his bestselling Song of Ice and Fire series, basis for the hit HBO series Game of Thrones.

"'The Princess and the Queen' is densely packed with warfare, politicking, bloody melodrama, and dragon-on-dragon assault. It reads like Martin's outline for a Game of Thrones prequel that never was." —Entertainment Weekly

Gardner Dozois (1947-2018), one of the most acclaimed editors in science-fiction, won the Hugo Award for Best Editor 15 times. He was the editor of Asimov’s Science Fiction Magazine for 20 years. He also served as the editor of The Year’s Best Science Fiction anthologies and co-editor of the Warrior anthologies, Songs of the Dying Earth, and many others. As a writer, Dozois twice won the Nebula Award for best short story. He was inducted into the Science Fiction Hall of Fame in 2011 and received the Skylark Award for Lifetime Achievement. He lived in Philadelphia, Pennsylvania.

"‘The Princess and the Queen'…reads like Martin's outline for a Game of Thrones prequel that never was." —Entertainment Weekly

“Venerable editors Martin and Dozois have invited writers from many different genres of fiction to showcase the supposedly weaker sex’s capacity for magic, violence, and mayhem.…Delivers something for nearly every reader’s taste as it explores the heights that brave women can reach and the depths that depraved ones can plumb.” – Publishers Weekly, starred review

Bold and deadly female characters of many genres stride through the pages of this massive anthology. Everyone will find something to like here.” – Kirkus, starred review

“Dozois and Martin are exemplars of seasoned professionals...While readers familiar with the authors included may be assured that they will get stories of the quality that they expect, perhaps the work could serve even better as an introductory sampling of a diverse assortment of talents.” —RT Book Reviews (4 stars)

“Several high-profile authors set stories in the worlds of their best-selling series.” —Booklist

“I look forward to a time when there is no need for an anthology devoted to heroines because they will have become as ubiquitous as heroes. In the meantime, Dangerous Women is a welcome addition to our literature.” —Bookslut.com

“Every piece in the collection is written by a heavy hitter with multiple strong-selling novels under his or her belt. Each story provides a unique take on the anthology's theme. If you've had your fill of damsels in distress, I encourage you to give Dangerous Women a try.”—Popmythology.com