The Ruin of Kings (A Chorus of Dragons #1) (Mass Market) 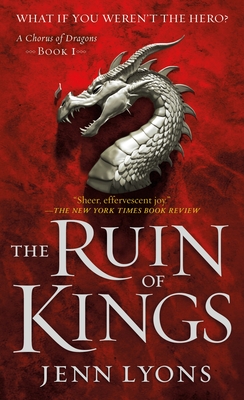 This is book number 1 in the A Chorus of Dragons series.

The Ruin of Kings is a fascinating narrative; it's a text that exists within the world that Lyons has created, with relevant footnotes and annotations to add to the reader's understanding. When we begin our story, Kihrin, our protagonist, is in prison. His jailer, a mimic who can read minds and change her appearance at will, demands her prisoner tell her a story. And so it begins, with Kihrin explaining just how he wound up in this situation. He and his jailer take turns retelling the events that led us to this moment, with each chapter alternating viewpoints. Even though the two stories take place at different points in time, they both weave together brilliantly. It's a tale of gods, kings, and demons. And that's only the beginning. As an avid reader of epic fantasy stories, it just doesn't get much better than this!

When destiny calls, there's no fighting back.

Kihrin grew up in the slums of Quur, a thief and a minstrel's son raised on tales of long-lost princes and magnificent quests. When he is claimed against his will as the missing son of a treasonous prince, Kihrin finds himself at the mercy of his new family's ruthless power plays and political ambitions.

Practically a prisoner, Kihrin discovers that being a long-lost prince is nothing like what the storybooks promised. The storybooks have lied about a lot of other things, too: dragons, demons, gods, prophecies, and how the hero always wins.

Then again, maybe he isn't the hero after all. For Kihrin is not destined to save the world.

He's destined to destroy it.

Jenn Lyons begins the Chorus of Dragons series with The Ruin of Kings, an epic fantasy novel about a man who discovers his fate is tied to the future of an empire.

"It's impossible not to be impressed with the ambition of it all . . . a larger-than-life adventure story about thieves, wizards, assassins and kings to dwell in for a good long while."—The New York Times