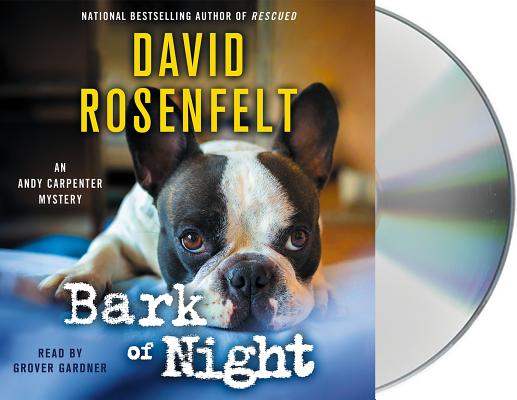 This is book number 19 in the An Andy Carpenter Novel series.

"Listening to Grover Gardner narrating a David Rosenfelt novel is like sliding into favorite slippers at the end of a long day: One feels the joyful gratification of a perfect fit." — AudioFile

When defense lawyer Andy Carpenter’s veterinarian asks to speak to him privately at the checkup of his golden retriever, Tara, the last thing Andy expects is Truman. Tiny, healthy, French bulldog Truman was dropped off days ago with instructions to be euthanized by a man everyone thought was his owner. But now the owner is nowhere to be found.

Andy is furious. Who would want to euthanize a perfectly healthy dog with no explanation? He is willing to whisk Truman away to the Tara Foundation, the dog-rescue organization which is Andy’s true passion. They will find a home for Truman. But that’s not all the vet tells Andy. Thanks to Truman’s chip, it’s discovered that the man wasn’t Truman’s owner at all . . . Truman's real owner was murdered.

It’s now up to Andy – with help from his loyal sidekick Tara, Truman and the rest of the gang – to solve this case. In the latest in the popular Andy Carpenter mystery series, David Rosenfelt’s charmingly clever wit and love of dogs are back and better than ever.

Grover Gardner has recorded more than 650 audiobooks since beginning his career in 1981.  He's been named one of the "Best Voices of the Century" as well as a "Golden Voice" by AudioFile magazine.  Gardner has garnered over 20 AudioFile Earphones Awards and is the recipient of an Audio Publishers Association Audie Award, as well as a three-time finalist.  In 2005, Publishers Weekly deemed him "Audiobook Narrator of the Year."

Gardner has also narrated hundreds of audiobooks under the names Tom Parker and Alexander Adams.  Among his many titles are Marcus Sakey's At the City's Edge, as well as Star Wars: The Phantom Menace, Mark Twain's The Adventures of Tom Sawyer, and John Irving's The Cider House Rules.  Gardner studied Theater and Art History at Rollins College and received a Master's degree in Acting from George Washington University.  He lives in Oregon with his significant other and daughter.