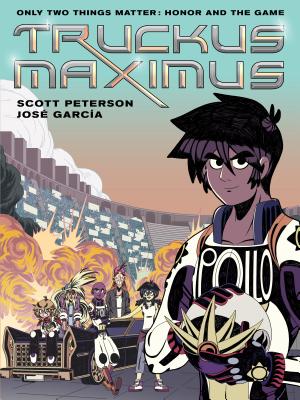 In a near-future world where the Roman Empire never fell, only two things matter: honor and the Game.

“The Game” is Truckus Maximus, a competition where drivers race against one another—to the death.

The best of the best is a young driver named Axl. The leader of Team Apollo, Axl drives hard and lives by a strict moral code. That code will be tested to its limits by the Caesar—the cunning ruler of the Roman Empire—and the Dominus, the absolute master of the Truckus Maximus games who can change its rules at will.

But Axl can't survive this race on his own. To do that, he'll have to embrace his team, including a defiant new racer named Piston. Will he learn that family is more important than honor or the Game? Or will he go down in flames?

Scott Peterson got his start in comics at DC Comics, where he edited Detective Comics and Batman: Black & White. He later went on to write The Gotham Adventures, and helped create not one, but two Batgirls, the first as the co-writer of DC's first ever monthly Batgirl series and the second as the writer of Batgirl Beyond. He's also written children's books, animation, music reviews, webcomics and novels. Scott lives up in the Pacific Northwest with his magnificent wife, children's author Melissa Wiley, and most of their six children. (One escaped.)

José García grew up in Mexico reading superhero comics and watching anime on TV, started working at age 12, and is now a freelance, self-taught comic book artist and 2-D animator. He has worked for many animation studios and publishers, such as Electronic Arts, Heavy Metal, Devil's Due Publishing, Boom! Studios, and Ankama Editions, among others, and is still trying to break into comics.

"The plot reads like an alt-world action movie, complete with training montages and climactic race to the finish, but the story never loses its heart or its humor." —Bulletin of the Center for Children's Books