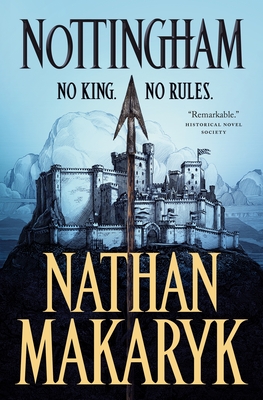 This is book number 1 in the Nottingham series.

Makaryk’s Robin Hood-inspired debut Nottingham feels like a return to fresh, invigorating storytelling. There is so much to love about this book where captivating plot twists, nuanced characterizations, and superb writing all take center stage. Robin Hood himself is just one of the many characters whose perspectives, choices, and deeds – good or ill – make up the story. In Nottingham nothing is black and white. No one is a complete villain or hero. Makaryk’s layered characters and rich setting ground the story in a realistic and compelling narrative while clever dialogue throughout captures the familiar, jovial spirit of the Robin Hood legend. It’s a rare and special thing to have a novel so steeped in legend and folktale be such a breath of fresh air. An impressive debut and a strong contender for my favorite novel of 2019. – Kelly

Nathan Makaryk's epic and daring debut rewrites the Robin Hood legend, giving voice to those history never mentioned and challenging who's really a hero and a villain.

“The most pleasurable reading experience I've had since first discovering George R.R. Martin's A Song of Ice and Fire.” — Bryan Cogman, Co-Executive Producer and Writer, Game of Thrones

No king. No rules.

England, 1191. King Richard is half a world away, fighting for God and his own ambition. Back home, his country languishes, bankrupt and on the verge of anarchy. People with power are running unchecked. People without are growing angry. And in Nottingham, one of the largest shires in England, the sheriff seems intent on doing nothing about it.

As the leaves turn gold in the Sherwood Forest, the lives of six people—Arable, a servant girl with a secret, Robin and William, soldiers running from their pasts, Marion, a noblewoman working for change, Guy of Gisbourne, Nottingham’s beleaguered guard captain, and Elena Gamwell, a brash, ambitious thief—become intertwined.

And a strange story begins to spread . . .

Nathan Makaryk is the author of Nottingham, and a theater owner, playwright, director and actor, living in southern California. None of these pay very well, so he also has a real job teaching audio systems networking software to people who have no idea he's also a novelist and theater guy. He likes dogs and scotch because of course he does.