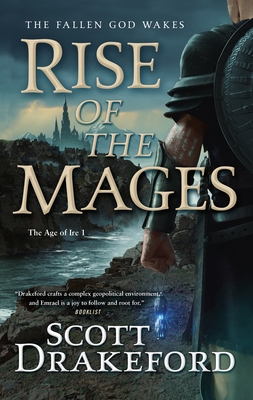 Emrael Ire wants nothing more than to test to be a weapons master. His final exam will be a bloody insurrection, staged by corrupt nobles and priests, that enslaves his brother.

With the aid of his War Master tutor, herself an undercover mage, Emrael discovers his own latent and powerful talents.

To rescue his brother, Emrael must embrace not only his abilities as a warrior but also his place as last of the ancient Mage Kings—for the Fallen God has returned.

And he is hungry.

SCOTT DRAKEFORD is a longtime lover of the written word, especially fantasy fiction. Rise of the Mages is his debut epic fantasy.

He had his first taste of ‘the good stuff’ in his younger years. He spent countless hours reading and re-reading his favorite fantasy novels, shaping him more than was probably healthy, and lurking sites like Wotmania (RIP) while waiting for each new book to come out.

Later in life, he was tricked into becoming a “responsible adult”, getting a degree in engineering, and living the corporate life in the technology industry.

Scott currently lives in the Boston area with his badass tech wizard of a wife, their tenacious daughter, and two dogs.

“Drakeford crafts a complex geopolitical environment, and Emrael is a joy to follow and root for.”—Booklist

“[This} superbly crafted and epic fantasy saga is the first volume in his new 'Age of Ire' series and will keep enthusiastic readers eagerly awaiting the next installment. ”—Midwest Book Review

“Rise of the Mages is a proper adventure, bursting with bloody action and exciting twists. Emrael is a fantastic lead, full of strength and loyalty, but also a hot-headed impulsiveness and a compelling inner darkness that I couldn’t get enough of.” —Brian Naslund, author of Blood of an Exile

“Rise of Mages opens a door into a character-driven world of distinctive magic, rousing adventure, and corruption of the first order. Fantasy lovers will experience the full range of curiosity, anger, delight, frustration, joy, and satisfaction.” —Kel Kade

“This is old-school and new-school epic fantasy rolled into one. Drakeford has built a superbly crafted world infused with a myriad of well-rounded characters and plenty of action, magic, and mystery. Rise of the Mages is a fast-paced adventure that will satisfy any fantasy fan young or old.” —Brian Lee Durfee, author of The Forgetting Moon

“An immersive world epic fantasy fans will be glad to return to.” —Publishers Weekly

“Drakeford has certainly laid the groundwork for a truly captivating epic fantasy series.”—Out of This World SFF