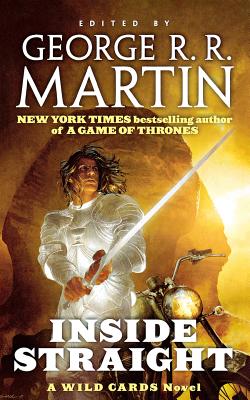 Now in development for TV: Rights to develop Wild Cards for TV have been acquired by Universal Cable Productions, the team that brought you The Magicians and Mr. Robot, with the co-editor of Wild Cards, Melinda Snodgrass as executive producer.

In 1946, an alien virus that rewrites human DNA was accidentally unleashed in the skies over New York City. It killed ninety percent of those it infected. Nine percent of those who survived mutated into tragically deformed creatures. And one percent gained superpowers. The Wild Cards shared-universe series, created and edited since 1987 by New York Times #1 bestseller George R. R. Martin along with Melinda Snodgrass, is the tale of the history of the world since then--and of the heroes among that one percent.

Originally begun in 1987, long before George R. R. Martin became a household name among fantasy readers ("The American Tolkien" --Time magazine), the Wild Cards series earned a reputation among connoisseurs for its smart reimagining of the superhero idea. Now, with Inside Straight, the Wild Cards continuity jumps forward to a new generation of major characters, entirely accessible to Martin's hundreds of thousands of new readers, with all-original stories by Martin himself, along with Daniel Abraham, Michael Cassutt, and Stephen Leigh, among others.

George R.R. Martin is the author of the acclaimed, internationally bestselling fantasy series A Song of Ice and Fire, adapted into the hit HBO series Game of Thrones. He is also the editor and contributor to the Wild Cards series, including the novels Suicide Kings and Fort Freak, among other bestsellers. He has won multiple science fiction and fantasy awards, including four Hugos, two Nebulas, six Locus Awards, the Bram Stoker, the World Fantasy Award, the Daedelus, the Balrog, and the Daikon (the Japanese Hugo). Martin has been writing ever since he was a child, when he sold monster stories to neighborhood children for pennies, and then in high school he wrote fiction for comic fanzines. His first professional sale was to Galaxy magazine, when he was 21. He has been a full-time writer since 1979. Martin has bachelor's and master's degrees in journalism from Northwestern University. He lives in Santa Fe, New Mexico.This volume was edited by George R. R. Martin, with the assistance of Melinda M. Snodgrass, and written by: Daniel AbrahamMelinda M. SnodgrassCarrie VaughnMichael CassuttCaroline SpectorJohn Jos. MillerGeorge R. R. MartinIan TregillisS. L. Farrell