The Memory of Souls (A Chorus of Dragons #3) (Hardcover) 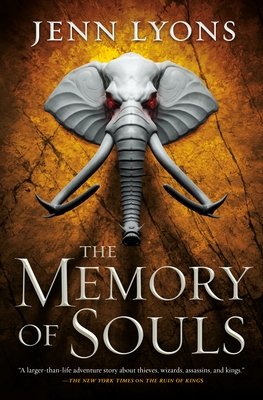 This is book number 3 in the A Chorus of Dragons series.

Right off the bat, I'm just going to say that this is my absolute favorite fantasy series that is currently ongoing. Lyons has done such an incredible job building up this world, and all of her characters are so rich. After the devastating events in the city of Artine, our four hellwarrior children are finally united! Of course, this means the gods have big plans for their journey. And Relos Var is not far behind. With the seal on Vol Karoth's prison broken, Kihrin has been hard at work trying to undo the damage caused by Var. I love these characters to pieces, all four children of prophecy are so complex and well written, and things only get more interesting as they begin to uncover the history of their past lives, and how their souls have been intertwined through millenia. Do yourself a favor and buy this book!

The Memory of Souls is the third epic fantasy in Jenn Lyons’ Chorus of Dragons series and one of Library Journal's best SF&F books of the year!

THE LONGER HE LIVES
THE MORE DANGEROUS HE BECOMES

Now that Relos Var’s plans have been revealed and demons are free to rampage across the empire, the fulfillment of the ancient prophecies—and the end of the world—is closer than ever.

To buy time for humanity, Kihrin needs to convince the king of the Manol vané to perform an ancient ritual which will strip the entire race of their immortality, but it’s a ritual which certain vané will do anything to prevent. Including assassinating the messengers.

Worse, Kihrin must come to terms with the horrifying possibility that his connection to the king of demons, Vol Karoth, is growing steadily in strength.

How can he hope to save anyone when he might turn out to be the greatest threat of them all?


A Chorus of Dragons
1: The Ruin of Kings
2: The Name of All Things
3: The Memory of Souls

“Lyons has cleverly taken the epic fantasy tropes of prophecy and lineage and stood them on their heads, all while delving deep into her multidimensional characters and spinning great battles with high body counts.”—Booklist, starred review

“Lyons braids multiple points of view, tenses, and time lines into a richly detailed and elaborate story with increasing tension and stakes. . . . The third Chorus of Dragons book is an exciting entry in the series, culminating in an intriguing endpoint that will have readers excited for the next book.”—Library Journal, starred review

Praise for The Name of All Things:

“Lyons proves she is worthy of comparison to other masters of epic fantasy.”—Booklist, starred review

“Lyons is creating a complex and wonderful series that will immerse and delight.”—Library Journal