The Name of All Things (A Chorus of Dragons #2) (Hardcover) 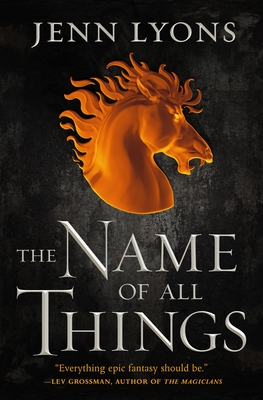 This brilliant follow up to Lyon's debut novel, The Ruin of Kings, is truly a fantasy for the ages. After the death of the emperor, the destruction of the Stone of Shackles, and the unleashing of demons across the living world, it appears that the prophecies about Kihrin were true. While hunkered down to hide from yet another dragon, Kihrin meets the woman of his dreams. Janel, and her companion Brother Qown, have come a long way to be trapped in this tavern with Kihrin, and while the world outside falls apart, they catch him up on the events that led them to be here. Once again, Lyon's weaves this narrative together as a text that exists in-universe, lovingly annotated by Senera, a "faithful and obedient" servant of Relos Var. It's funny, tragic, brilliant, and complicated. I cannot get enough.

Jenn Lyons Jenn Lyons lives in Atlanta, Georgia, with her husband, three cats and a nearly infinite number of opinions on anything from Sumerian mythology to the correct way to make a martini. Lyons traces her geek roots back to playing first edition Dungeons & Dragons in grade school and reading her way from A to Z in the school's library. Formerly an art director and video game producer, she now spends her days writing fantasy. In 2020, she was nominated for the Astounding Award for Best New Writer. Her five-book Chorus of Dragons fantasy series begins with The Ruin of Kings.