The Ruin of Kings (A Chorus of Dragons #1) (Paperback) 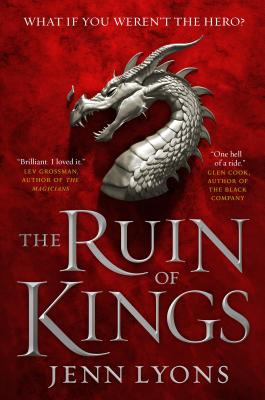 This is book number 1 in the A Chorus of Dragons series.

Enter a world of corrupt empires, fading gods, and an evil so great that it could consume the universe. Kihrin is a musician by day & a key, a street thief good at picking locks & picking pockets, by night. His only aspirations are to save enough money to move far away from the capital city of Quur with his father and his sweetheart, buy a tavern, & live life in obscurity & comfort. But when he accidentally witnesses the summoning of a demon by powerful wizards from the royal households, he is thrown into a web of deceit, political machinations, and cosmic conflict - and at the center of it all is a web of prophecies that all lead back to him. What do you do when your destiny is not to save the world, but to destroy it? Pick up this book & be transported into an epic fantasy that will have you grasping for answers as you journey alongside Kihrin and make deals with dragons, learn magic, and maybe, if you're lucky, save the world.

When destiny calls, there's no fighting back.

Kihrin grew up in the slums of Quur, a thief and a minstrel's son raised on tales of long-lost princes and magnificent quests. When he is claimed against his will as the missing son of a treasonous prince, Kihrin finds himself at the mercy of his new family's ruthless power plays and political ambitions.

Practically a prisoner, Kihrin discovers that being a long-lost prince is nothing like what the storybooks promised. The storybooks have lied about a lot of other things, too: dragons, demons, gods, prophecies, and how the hero always wins.

Then again, maybe he isn't the hero after all. For Kihrin is not destined to save the world.

He's destined to destroy it.

Jenn Lyons begins the Chorus of Dragons series with The Ruin of Kings, an epic fantasy novel about a man who discovers his fate is tied to the future of an empire.

"It's impossible not to be impressed with the ambition of it all . . . a larger-than-life adventure story about thieves, wizards, assassins and kings to dwell in for a good long while."—The New York Times