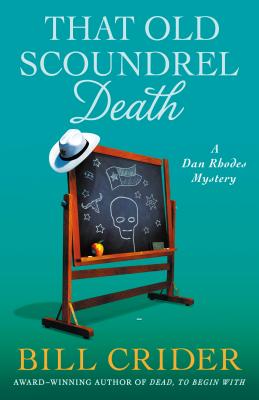 This is book number 25 in the Sheriff Dan Rhodes Mysteries series.

Beloved Texas Sheriff Dan Rhodes is back with his final murder case in That Old Scoundrel Death.

When a man is run off the road by a thug with a snake tattooed around his neck, Sheriff Dan Rhodes knows it's his duty to stop and help out. The grateful victim gives his name as Cal Stinson, on his way to the nearby town of Thurston to take a look at the old school building before the city tears it down.

The next day, Cal Stinson turns up again. Only this time, he's dead.

His body is found in the dilapidated school that's about to be razed, and the woman who let Cal onto the premises claims he gave his name as Bruce Wayne. Whoever is he is, he was shot in the back of the head, and a piece of chalk lies inches away from his hand, under a lone line on the chalkboard, his last words unfinished.

Between not-so-bright hoodlums who can't seem to stay on the right side of the law, powerful families in town who are ready to go to battle over whether the old school should come down, and trying futilely to get private detective Seepy Benton to stop making mountains of mole hills, Sheriff Rhodes is beginning to wonder if retirement might be as good as it sounds.

"A satisfying final ending to Rhodes's career. Crider's works remain a model for mysteries featuring small-town sheriffs who take on cases with wit and humanity."—Library Journal

"Crider (1941–2018) created a completely plausible fictional sleuth with a welcome sense of humor in Rhodes; fans will miss him."—Publishers Weekly

"Crider's final novel is a charming, action-rich, and entertaining traditional mystery...a fine ending to the Dan Rhodes series. The plotting is perfect, one scene melting flawlessly into the next. It's complex mystery is both clever and amusing and will keep the reader guessing until the final pages."—Mystery Scene Magazine