Another One Bites the Crust: A Bakeshop Mystery (Mass Market) 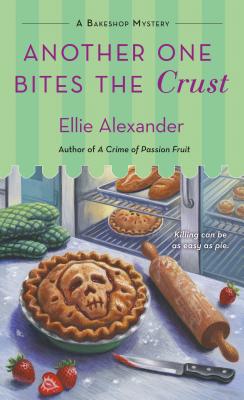 This is book number 7 in the A Bakeshop Mystery series.

Torte—the beloved small-town bakeshop run by Jules Capshaw—is set to hit the stage. But who would have guessed that murder would makes a surprise appearance?

It’s the role of a lifetime for Jules. The Shakespeare Festival has returned to Ashland, Oregon, for the season and Torte has been cast as the supplier of Elizabethan-era treats for the main event. But on the eve of opening night, a brawl between Jules’s friend Lance, the artistic director, and a strapping young thespian named Anthony almost brings down the house. . .and the next morning, Anthony is dead. Jules knows that Lance loves his drama—and his just desserts—but she also knows that murder is way off-script for him. Now it’s up to Jules to cut through a bevy of backstage betrayals and catty co-stars who all have their own secrets—before the curtain drops on someone else. . .

The Bakeshop mysteries are:

ELLIE ALEXANDER is a Pacific Northwest native who spends ample time testing pastry recipes in her home kitchen or at one of the many famed coffeehouses nearby. When she's not coated in flour, you'll find her outside exploring hiking trails and trying to burn off calories consumed in the name of research. She is the author of the Bakeshop Mysteries, including Meet Your Baker and A Batter of Life and Death, as well as the Sloan Krause mysteries.

"This delectable series transports readers to Ashland, Oregon... I highly recommend this series to readers who enjoy clever plots, likable characters, and good food." —Mystery Scene on A Batter of Life and Death

"A Batter of Life and Death is a delightful cozy mystery that will keep you turning pages to see what Jules is going to get into next.... Grab a few napkins, because you'll be drooling all over the pages as you read some of the delicious-sounding recipes these chefs are cooking up." —Fresh Fiction