Death in the Stars: A Kate Shackleton Mystery (Hardcover) 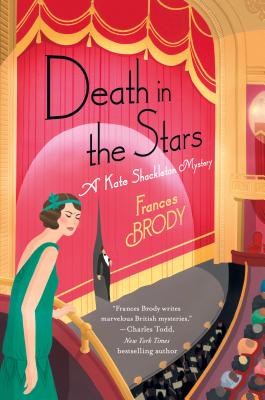 This is book number 9 in the A Kate Shackleton Mystery series.

France Brody captures the atmosphere and language of 1920s England while delivering a captivating plot in the ninth book of this traditional cozy mystery series featuring private investigator Kate Shackleton.

During the eclipse, Selina's friend and co-star Billy Moffatt disappears and is later found dead in the chapel grounds. Kate can't help but dig deeper and soon learns that two other members of the theatre troupe died in similarly mysterious circumstances in the past year. With the help of Jim Sykes and Mrs Sugden, Kate sets about investigating the deaths -and whether there is a murderer in the company.

When Selina's elusive husband Jarrod– who was injured in the war and is subject to violent mood swings—comes back on the scene, Kate begins to imagine something far deadlier at play, and wonders just who will be next to pay the ultimate price for fame.

FRANCES BRODY lives in Leeds in the North of England. Before turning to crime with her first book in the Kate Shackleton series Dying in the Wool, she wrote historical sagas, winning the HarperCollins Elizabeth Elgin award for most regionally evocative debut saga of the millennium. Other Kate Shackleton Mysteries include Death at the Seaside, A Death in the Dales, and Murder on a Summer's Day.

"Authentic period detail and memorable characters from the British music hall world distinguish this traditional mystery." —Publishers Weekly on Death in the Stars

"The author keeps us highly entertained with an interesting and exciting plot, impeccably researched and a style of writing that has the reader turning the pages eagerly to discover the truth of the mystery." —Yorkshire Gazette & Herald on Death in the Stars

"There are red herrings and clues aplenty here, and the prose is clear, succinct and readable. This is an enjoyable and well-plotted whodunit. It captures the 1920's perfectly, and caused me to read well into the night on a couple of occasions." —Crime Squad on Death in the Stars

"Well-researched historical details, local knowledge, and some charming descriptive writing with vivid evocations of time and place make all the stories a great read. But this one, which opens with the brilliantly described solar eclipse of 1927, then transports itself into the fading days of music hall, is probably Brody’s best yet." —Crime Review on Death in the Stars

"Frances Brody has the ability to transport you to any scene, be it the crowds watching the eclipse in the Yorkshire dales or the tunnels under the centre of Leeds which linked the old theatres.... I constantly marvel at how Brody comes up with a new milieu for each book and then develops a convincing story which grips you from beginning to end." —The Bookbag on Death in the Stars

"Frances Brody writes marvelous British mysteries, and if you haven't met the wonderful Kate Shackleton, Death at the Seaside is the perfect place to start this terrific series! Whether you are already a Brody fan or new to the Kate Shackleton series, Death at the Seaside is a mystery you just plain can't miss!" —Charles Todd, bestselling author of the Ian Rutledge Mysteries and the Bess Crawford Mysteries

"A delightful trip through time and space to 1920s England with a heroine who would make the ladies of the Golden Age proud." —Rhys Bowen, New York Times bestselling author of the Royal Spyness and Molly Murphy novels on Death at the Seaside

"In Kate Shackleton, Frances Brody has created a smart and endearing sleuth whose resourcefulness and skill for deduction shine as she investigates murders in 1920s England. With vivid settings, colorful characters, and excellently-plotted mysteries, this series is an absolute delight!" —Ashley Weaver, author of the Amory Ames mysteries on Death at the Seaside

"Frances Brody matches a heroine of free and independent spirit with a vivid evocation of time and place. [A] Death in the Dales is a novel to cherish."— Daily Mail (UK)

“It felt so different, so fresh and so clever, a story written with a lot of subtlety and gentleness, and also with a great dose of humor. Even though the plot was complex...it was still a very neat, logical read, and the characters were brilliant representatives of this age...I really can’t wait for more.”—On My Bookshelf on A Death in the Dales

“Cozy it may be, but this story is also convincing, compelling, and clever…Once you’ve met Kate Shackleton, you’ll want to read more of her!” — Crime Review on A Death in the Dales

“Brody has the style of the classic British cozy down pat.” —Kirkus Reviews on Death of An Avid Reader

"Frances Brody has made it to the top rank of crime writers." —Daily Mail (UK) on Death of an Avid Reader

"This is a well written, engaging story, easy to read and positively breathing the atmosphere of its setting and time.”—Crime Review on Death of an Avid Reader

"It's very difficult to recommend further reading which comes up to the standard of the Kate Shackleton books." —The Bookbag

A mash-up of "Masterpiece" series "Indian Summers" and "Downtown Abbey. —New York Post on Murder on a Summer's Day

"Frances Brody knows how to hold the reader attention and make them continue reading into the small hours of the night."—The Press(UK) on Murder on a Summer's Day

"Reminiscent of Dorothy L. Sayers and Agatha Christie with a thoroughly likeable protagonist and a plot that held me to the end."—Mignon F. Ballard, author of the Miss Dimple Kilpatrick Mystery Series on Dying in the Wool

"A winning heroine, a fresh and fascinating setting, richly detailed and well-woven into the plot, and a mystery that twists and tightens and twists again..." —Catriona McPherson, author of Dandy Gilver and the Proper Treatment of Blood Stains on Dying in the Wool

“The 1920s are a fascinating and under-used period for new crime fiction, so it's a particular pleasure to have Frances setting her story at that time. Kate Shackleton is a splendid heroine … I'm looking forward to the next book in the series!” —Ann Granger on Dying in the Wool