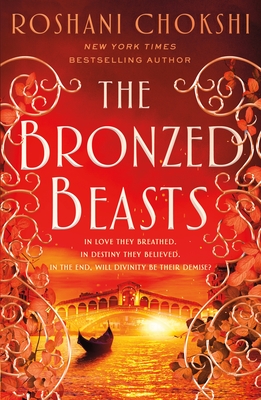 This is book number 3 in the The Gilded Wolves series.

Returning to the dark and glamorous 19th century world of her New York Times instant bestseller, The Gilded Wolves, Roshani Chokshi dazzles us with the final riveting tale as full of mystery and danger as ever in The Bronzed Beasts.

After Séverin's seeming betrayal, the crew is fractured. Armed with only a handful of hints, Enrique, Laila, Hypnos and Zofia must find their way through the snarled, haunted waterways of Venice, Italy to locate Séverin. Meanwhile, Séverin must balance the deranged whims of the Patriarch of the Fallen House and discover the location of a temple beneath a plague island where the Divine Lyre can be played and all that he desires will come to pass.

With only ten days until Laila expires, the crew will face plague pits and deadly masquerades, unearthly songs and the shining steps of a temple whose powers might offer divinity itself...but the price of godhood may just cost them everything they hold dear.

"Readers invested since the first installment will hold this last story close to their hearts...An emotionally charged and passionate farewell to an invigorating fantasy series." - Kirkus Review, starred review

"Chokshi’s refusal to give readers exactly what they want is precisely what makes The Gilded Wolves series so compelling. Plus, all of the heart-wrenching interpersonal angst and introspection doesn’t get in the way of the treasure hunts and puzzle solving that we’ve come to love and expect." - Polygon, "The best science fiction and fantasy books of 2021"