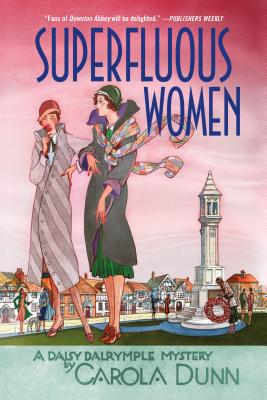 By Carola Dunn
Unavailable to Order
Hard to Find

This is book number 22 in the Daisy Dalrymple Mysteries series.

In England in the late 1920s, The Honourable Daisy Dalrymple Fletcher, on a convalescent trip to the countryside, goes to visit three old school friends in the area. The three, all unmarried, have recently bought a house together. They are a part of the generation of "superfluous women"—brought up expecting marriage and a family, but left without any prospects after more than 700,000 British men were killed in the Great War.

Daisy and her husband Alec—Detective Chief Inspector Alec Fletcher, of Scotland Yard —go for a Sunday lunch with Daisy's friends, where one of the women mentions a wine cellar below their house, which remains curiously locked, no key to be found. Alec offers to pick the lock, but when he opens the door, what greets them is not a cache of wine, but the stench of a long-dead body.

And with that, what was a pleasant Sunday lunch has taken an unexpected turn. Now Daisy's three friends are the most obvious suspects in a murder and her husband Alec is a witness, so he can't officially take over the investigation. So before the local detective, Superintendent Underwood, can officially bring charges against her friends, Daisy is determined to use all her resources (Alec) and skills to solve the mystery behind this perplexing locked-room crime.

“Dunn's forebears are writers such as Agatha Christie and Dorothy L. Sayers. They set the standard for classic cozy puzzles, and Heirs of the Body's unfussy prose and straightforward plot lend themselves well to this venerable tradition.” —Seattle Times on Heirs of the Body

“A witty historical cozy series.” —Library Journal on Heirs of the Body

“Entertaining… Fans of Downton Abbey will be delighted.” —Publishers Weekly on Heirs of the Body