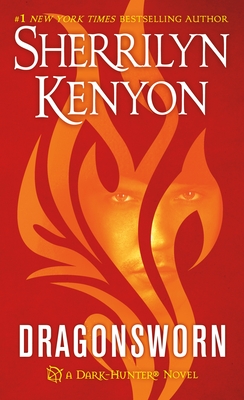 This is book number 21 in the Dark-Hunter Novels series.

There is nothing in the universe the cursed dragon Falcyn hates more than humans—except for Greek humans. In a war he wanted no part in, they systematically destroyed everything Falcyn ever cared about. Now he lies in wait for the day when evolution will finally rid him of not only the Greeks but humanity itself.

Medea is the granddaughter of the Greek god Apollo and among the first he doomed to die. When Apollo sends a new plague to destroy what remains of Medea’s people, she refuses to let him take everything she loves from her again. This time, she knows of a secret weapon—a fierce dragon who has the power to stop the ancient god and his army of demons. His name is Falcyn. But he wants nothing to do with politics, gods, mortals. And especially not her—yet. But if Medea can find a way to control a demonic dragon whose sole birthright is world annihilation, maybe there is hope. . .

[A] publishing phenomenon . . . [Sherrilyn Kenyon is] the reigning queen of the wildly successful paranormal scene . . . Just one example of arguably the most in-demand and prolific authors in America these days. —Publishers Weekly

Kenyon's writing is brisk, ironic and relentless imaginative. These are not your mother's vampire novels —Boston Globe

“A fascinating ride.” – Reader to Reader on Dragonbane

“Once again Ms. Kenyon has managed to blow me away with another fantastical and imaginative story in Son of No One. “– The Reading Café