Another Man's Ground: A Mystery (Sheriff Hank Worth Mysteries #2) (Hardcover) 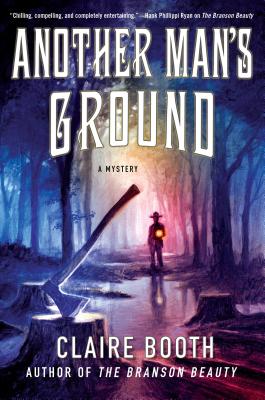 By Claire Booth
Unavailable to Order
Out of Print

This is book number 2 in the Sheriff Hank Worth Mysteries series.

"This contemporary take on a locked-room puzzle is chilling, compelling and completely entertaining, and Claire Booth is a wonderful new voice in crime fiction.”—Hank Phillippi Ryan on The Branson Beauty

It starts out as an interesting little theft case. Branson, Missouri’s new Sheriff Hank Worth is called out to look at stands of trees that have been stripped of their bark, which the property owner had planned to harvest for the booming herbal supplement market. At first, Hank easily balances the demands of the investigation with his fledging political career. He was appointed several months earlier to the vacant sheriff position, but he needs to win the fast-approaching election in order to keep his job. He thinks the campaign will go well, as long as he’s able to keep secret the fact that a group of undocumented immigrants – hired to cut down the stripped trees – have fled into the forest and he’s deliberately not looking for them.

But then the discovery of a murder victim deep in the Ozark backwoods sets him in the middle of a generations-old feud that explodes into danger not only for him, but also for the immigrants, his deputies, and his family. He must rush to find a murderer before election day, and protect the vulnerable in Branson County, where politicking is hell and trespassing can get you killed.

In Another Man's Ground, her next novel featuring Sheriff Hank Worth, acclaimed author Claire Booth delivers a taut, witty mystery that will grip readers from the opening pages to the breathless conclusion.

CLAIRE BOOTH is a former true crime writer, ghostwriter, and reporter. She lives in California. The Branson Beauty, featuring Sheriff Hank Worth, is her first novel.

Praise for Another Man's Ground:

“Appealing…Booth’s affectionate treatment of a the decent and shrewd people of Branson and Worth makes this a series worth following.”—Publishers Weekly

Praise for The Branson Beauty:

“Claire Booth hits the ground running in this debut novel set in the Missouri Ozarks. She writes with the assurance and clarity of a more seasoned pro. Let's hope Branson County Sheriff Hank Worth can get himself reelected so that we get to see more of him and his family—especially the crusty father-in-law who takes babysitting to a whole new level.”—Margaret Maron, New York Times bestselling author of Designated Daughters

“Touches of sly humor add appeal to Booth’s standout debut...Betrayals from within the sheriff’s department and issues left unresolved hint at much more to come in what promises to be a most engaging regional police series.”—Publishers Weekly(starred review)

“Former crime reporter Booth imbues her fast-moving narrative, which celebrates its Ozarks setting, with humor and humanity. A promising debut.”—Booklist

“Quietly powerful, this novel pulls us into a snowy Ozark town where the new sheriff is learning to navigate small-town policing with a not entirely cooperative staff and a tiny budget, when a local girl is brutally murdered. Now he's facing the interference of local politicians and threats to his job while trying to settle into a new home with his two small children and ER doctor wife, while melding her recently widowed father into the household. With nuanced characters and an intricately unfolding plot—and a bone-deep sense of cold in this Ozark setting—this novel is reminiscent of William Kent Krueger or Giles Blunt. Claire Booth is a writer to watch.”—Sara J. Henry, national bestselling author of Learning to Swim