The Branson Beauty: A Mystery (Sheriff Hank Worth Mysteries #1) (Hardcover) 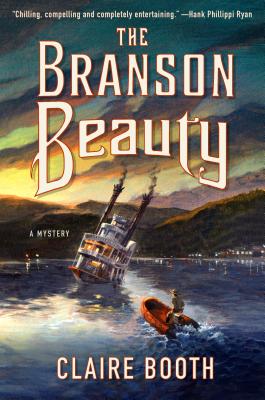 By Claire Booth
Unavailable to Order
Out of Print

This is book number 1 in the Sheriff Hank Worth Mysteries series.

On a very cold winter’s day, the Branson Beauty’s three-hour cruise turned into a nightmare. The paddle boat ran aground on a nearly frozen pond with more than 100 passengers, plus crew and entertainment, aboard. Recently appointed Sheriff Hank Worth became the point man for their intricate rescue. The company man wanted it kept quiet. But with every rescue agency responding and all the townspeople watching, that wasn’t going to happen. Hours later, after the surgically altered boat is docked and all the passengers are safe, Hank and the first mate find the body of a young girl in the locked captain’s dining room.

Written with both humor and poignancy, this mystery delves into the politics, relationships, and class structures of a small town, as the new sheriff ruffles the feathers of the rich and powerful. This is an easy-to-read, enjoyable book filled with unexpected plot twists and surprises. I look forward to the next installment of the series as I wonder if Hank, who is no team player, will be able to hang onto his job in the impending election

The Branson Beauty, an old showboat, has crashed in the waters of an Ozark mountain lake just outside the popular tourist destination of Branson, Missouri. More than one hundred people are trapped aboard. Hank Worth is still settling into his new role as county sheriff, and when he responds to the emergency call, he knows he’s in for a long winter day of helping elderly people into rafts and bringing them ashore. He realizes that he’ll face anxiety, arguments, and extra costs for emergency equipment that will stretch the county’s already thin budget to the breaking point.

But he is absolutely not expecting to discover high school track star Mandy Bryson’s body locked inside the Captain’s private dining room. Suddenly, Hank finds himself embroiled in a murder investigation, with the county commissioner breathing down his neck and the threat of an election year ahead of him. And as he wades deeper into the investigation, Hank starts to realize he’s up against a web of small town secrets much darker and more tangled than he could have ever imagined.

In her captivating debut novel, Claire Booth has created a broad cast of wonderfully compelling characters, and she perfectly blends humor with the emotional drama and heartache of a murder investigation.

CLAIRE BOOTH is a former true crime writer, ghostwriter, and reporter. She lives in California. The Branson Beauty, featuring Sheriff Hank Worth, is her first novel.

“Touches of sly humor add appeal to Booth’s standout debut...Issues left unresolved hint at much more to come in what promises to be a most engaging regional police series.”—Publishers Weekly (starred review)

“Former crime reporter Booth imbues her fast-moving narrative, which celebrates its Ozarks setting, with humor and humanity. A promising debut.”—Booklist

“Claire Booth hits the ground running in this debut novel set in the Missouri Ozarks. She writes with the assurance and clarity of a more seasoned pro. Let's hope Branson County Sheriff Hank Worth can get himself reelected so that we get to see more of him and his family—especially the crusty father-in-law who takes babysitting to a whole new level.”—Margaret Maron, New York Times bestselling author of Designated Daughters

“Quietly powerful, this novel pulls us into a snowy Ozark town where the new sheriff is learning to navigate small-town policing with a not entirely cooperative staff and a tiny budget, when a local girl is brutally murdered. Now he's facing the interference of local politicians and threats to his job while trying to settle into a new home with his two small children and ER doctor wife, while melding her recently widowed father into the household. With nuanced characters and an intricately unfolding plot—and a bone-deep sense of cold in this Ozark setting—this novel is reminiscent of William Kent Krueger or Giles Blunt. Claire Booth is a writer to watch.”—Sara J. Henry, national bestselling author of Learning to Swim

“A traditional mystery set in the Ozarks—a newcomer sheriff in a small town unearths ugly motives in a beautiful setting where greed, lust, and unintended consequences not only threaten the innocent but endanger all he loves. This contemporary take on a locked-room puzzle is chilling, compelling and completely entertaining, and Claire Booth is a wonderful new voice in crime fiction.”—Hank Phillippi Ryan, author of The Wrong Girl