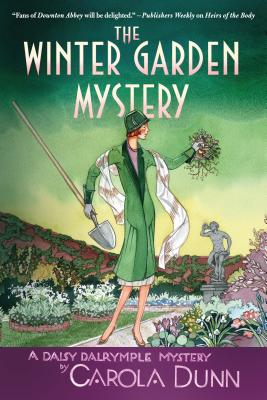 This is book number 2 in the Daisy Dalrymple Mysteries series.

In England, 1923, The Honorable Daisy Dalrymple has made a decision that, while shocking to her class, is in perfect keeping with the spirit of the times. Rather than live with relatives until she marries, she has decided to make her own living with her writing. Her series of articles on country manor homes has proven to be a success, and she travels to Occles Hall to research her latest piece.

What she finds is a household under the thumb of the ill-tempered and demanding Lady Valeria. And the discovery of the body of a pregnant maid buried in the winter garden does nothing to improve Lady Valeria's mood. A young Welsh under-gardener is arrested for the crime but Daisy is sure of his innocence. Wary of the air of secrecy that permeates Occles Hall, Daisy convinces Alec Fletcher of Scotland Yard to investigate further - a murder that is more complex and horrifying than either could have imagined.

“A charming cozy featuring an intelligent, strong woman. A treat for Daisy's fans as well as those who enjoy Jacqueline Winspear's Maisie Dobbs.” —Booklist on Gone West

“Delicious…pleasantly reminiscent of the old fashioned English mysteries of a of a bygone era.” —The Denver Post on Gunpowder Plot

“Dunn adds another winner to a long string of charming mysteries evocative of the period between the Great Wars.” —Kirkus Reviews (starred) on Gone West

“Dunn and Daisy are at the top of their game in the entertaining, old-school story of drawing room manners mixed with murder.” —Booklist on Sheer Folly

“Cunnning...appropriate historical detail and witty dialogue are the finishing touches on this engaging 1920s period piece.” —Publishers Weekly on The Bloody Tower