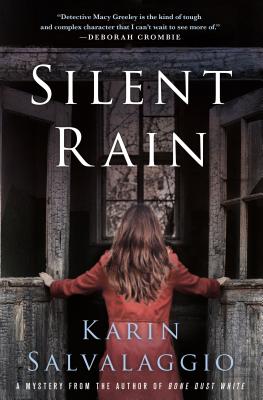 This is book number 4 in the Macy Greeley Mysteries series.

"Salvalaggio, whose trademarks include intricate plotting and stark but affecting prose, scores another triumph."—Richmond Times-Dispatch

Grace Adams has spent three years trying to move on—mentally, physically, emotionally—from the traumatizing events of her past. But it’s not easy when the world is morbidly curious about the crimes that shaped her childhood, when despite her changed name, people still track her down for the sensational details. Now in college in Bolton, Montana, the one person Grace has trusted with the truth about her past has betrayed her. The bestselling novelist Peter Granger wants to use Grace’s story in his next book, regardless of how desperate Grace is to keep the details to herself. And then, on Halloween night, Peter Granger’s house burns to the ground and his and his wife’s bodies are found inside.

Montana state detective Macy Greeley is sent to Bolton to handle the investigation into the fire and deaths…which soon appear to be arson and murder. It doesn’t take Macy long to realize that Grace isn’t the only one whom Peter Granger has betrayed, and there are no shortage of others in town who took issue with him and his wife. What at first looked like a straightforward investigation is poised to expose some of Bolton’s darkest secrets, and the fallout may put more than one life in danger.