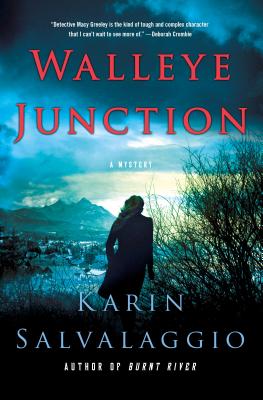 This is book number 3 in the Macy Greeley Mysteries series.

When outspoken radio talk show host Philip Long is kidnapped and murdered, Detective Macy Greeley leaves her young son in the care of her mother and heads up to remote Walleye Junction, Montana to take charge of the investigation. It is initially believed that Long’s murder is the result of a controversial radio show he’s done on the rise of far right militias in the state. Within days the two kidnappers are found dead following a massive heroin overdose, and the authorities are hopeful the investigation is finished. But there are too many discrepancies for Macy to settle for obvious answers. The kidnapper’s bodies have been moved, their son is on the run and a series of anonymous emails point investigators toward the murky world of prescription painkiller abuse. Macy soon finds herself immersed in small town intrigues as she races to find who’s really responsible for Philip Long’s murder.

Meanwhile, Philip Long’s daughter Emma is dealing with her own problems. It’s been twelve years since she left Walleye Junction after her best friend died from a drug overdose. Emma finds that little in Walleye Junction has changed in her absence. She is also becoming increasingly uneasy as the familiar surroundings stir up memories that are best forgotten.

With Walleye Junction, a taut, propulsive mystery, Karin Salvalaggio will once again grip readers from the opening page to the stunning conclusion.

“Highly suspenseful…Precise character studies, a perceptive look at small towns, and realistic twists all add up to a winner.”—Publishers Weekly (starred review)

“This is another complex thriller that drives much of its appeal from the author’s ability to evoke the small-town Montana setting; C.J. Box fans will feel right at home here.”—Booklist