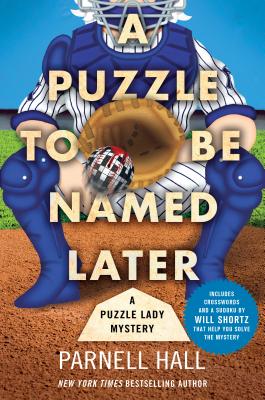 By Parnell Hall
Unavailable to Order
Out of Print

This is book number 18 in the Puzzle Lady Mysteries series.

“If sweet-looking, gray-haired Miss Marple cursed, smoked, and carried a gun in her purse, she’d be a ringer for Cora Felton.”—Booklist

The Puzzle Lady couldn’t be happier. Matt Greystone, the rookie sensation who just signed a huge contract with the Yankees after coming to the team as the player to be named later in a trade with the Diamondbacks, winning seventeen games as a starting pitcher, was coming to town to rehab from an arm injury. A diehard Yankee fan, Cora was delighted when Matt invited her to a weekend pool party.

On the plus side, she got to meet Derek Jeter.

On the minus side, she had to solve a puzzle (that was also named later), and a couple of the guests got killed.

Solving murders is right up the Puzzle Lady’s alley. Unfortunately, someone has broken into the house of a local psychiatrist and rifled her patient files, and Chief Harper wants Cora to solve that, too.

Cora already knows who broke into the house.

Parnell Hall is the co-author of the New York Times bestselling Teddy Fay thrillers. He is the author of the Puzzle Lady mysteries, the Stanley Hastings private eye novels, and the Steve Winslow courtroom thrillers. He is a Shamus Award winner, and has been nominated for the Edgar and the Lefty. He lives in New York City.

Praise for the Puzzle Lady Mysteries

“Hall [is] a master of the comic mystery.”—Richmond (Virginia) Times-Dispatch

“The pleasure is in the wordplay, at which Hall is a master. Across and down, the word is C-U-T-E.”—The New York Times Book Review