The Casualties: A Novel (Hardcover) 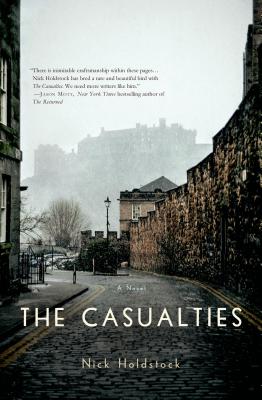 By Nick Holdstock
Unavailable to Order
Out of Print

In Nick Holdstock's The Casualties, a man recounts the final weeks of his neighborhood before the apocalyptic event that only a few of the eccentric residents will survive.

Samuel Clark likes secrets. He wants to know the hidden stories of the bizarre characters on the little streets of Edinburgh, Scotland. He wants to know about a nymphomaniac, a man who lives under a bridge, a girl with a cracked face. He wants to uncover their histories because he has secrets of his own. He believes, as people do, that he is able to change. He believes, as the whole world does, that there is plenty of time to solve his problems. But Samuel Clark and the rest of the world are wrong. Change and tragedy are going to scream into his and everyone's lives. It will be a great transformation, a radical change; and it just might be worth the cost.

Written by a rising literary star whose work has been published in notoriously selective publications such as n+1 and The Southern Review, The Casualties is an ambitious debut novel that explores how we see ourselves, our past and our possible futures. It asks the biggest question: How can we be saved?

NICK HOLDSTOCK's fiction and essays have appeared in a wide range of US and UK publications, including The London Review of Books, The Southern Review, n+1, Dissent, Vice, The Independent, and Los Angeles Review of Books. He is the author of The Tree That Bleeds: A Uighur Town on the Edge (Luath Press Ltd 2011), a book about life in China's Xinjiang province, and the forthcoming nonfiction book, China's Forgotten People (I B Tauris 2015). In 2012 he was awarded a Robert Louis Stevenson Fellowship for fiction. He lives in Edinburgh.