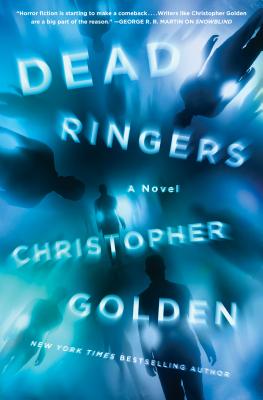 By Christopher Golden
Unavailable to Order
Out of Print

When Tess Devlin runs into her ex-husband Nick on a Boston sidewalk, she's furious at him for pretending he doesn't know her. She calls his cell to have it out with him, only to discover that he's in New Hampshire with his current girlfriend. But if Nick's in New Hampshire...who did she encounter on the street?

Frank Lindbergh's dreams have fallen apart. He wanted to get out of the grim neighborhood where he'd grown up and out of the shadow of his alcoholic father. Now both his parents are dead and he's back in his childhood home, drinking too much himself. As he sets in motion his plans for the future, he's assaulted by an intruder in his living room...an intruder who could be his twin.

In an elegant hotel, Tess will find mystery and terror in her own reflection. Outside a famed mansion on Beacon Hill, people are infected with a diabolical malice...while on the streets, an eyeless man, dressed in rags, searches for a woman who wears Tess's face...in Christopher Golden's Dead Ringers.

CHRISTOPHER GOLDEN is the award-winning, bestselling author of such novels as The Myth Hunters, The Boys Are Back in Town, Strangewood, and Of Saints and Shadows. He co-wrote the lavishly illustrated novel Baltimore, or, The Steadfast Tin Soldier and the Vampire with Mike Mignola, and the comic book series featuring the same character. His novel Ararat won the 2017 Bram Stoker Award for best horror novel.

"Golden’s chilling tale will have you shivering the next time you glance at your reflection. Is it really always you looking back?" - Washington Post

"Deeply disturbing and studded with ghastly imagery, this beautifully written narrative will inspire shudders with every turn of the page." - Publishers Weekly

"Dead Ringers rises above the standard horror-novel clichés with style...A supernatural horror novel that seems all too plausible thanks to its fast pace, adept characterization and fine sense of place." - Shelf Awareness

"Dead Ringers is a book with the momentum of a thriller, but it’s driven by character... [Golden] excels at character development and is one of the few writers working today who plays in the same league as Stephen King." - Slush Pile Heroes