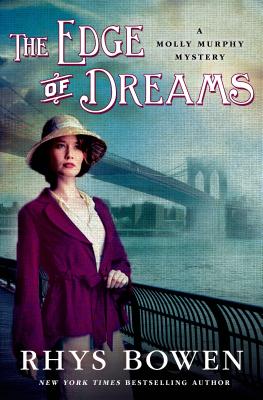 By Rhys Bowen
Unavailable to Order
Out of Print

This is book number 14 in the Molly Murphy Mysteries series.

From the author of In Farleigh Field...

Molly Murphy Sullivan's husband Daniel, a captain in the New York City police force, is stumped. He's chasing a murderer whose victims have nothing in common—nothing except for the taunting notes that are delivered to Daniel after each murder. And when Daniel receives a note immediately after Molly and her young son Liam are in a terrible train crash, Daniel and Molly both begin to fear that maybe Molly herself was the target.

Molly's detective instincts are humming, but finding the time to dig deeper into this case is a challenge. She's healing from injuries sustained in the crash and also sidetracked by her friends Sid and Gus's most recent hobby, dream analysis. And when Molly herself starts suffering from strange dreams, she wonders if they just might hold the key to solving Daniel's murder case.

Rhys Bowen is the author of the award-winning Molly Murphy and Constable Evans mysteries. Her novels have garnered an impressive array of awards and nominations, including the Anthony Award for her novel For the Love of Mike and the Agatha Award for Murphy’s Law. Her books have also won the Bruce Alexander Historical Award and the Herodotus Award, and have been shortlisted for the Edgar, the Agatha, the Macavity, the Barry, and the Mary Higgins Clark Award. She has also written Her Royal Spyness, a series about a minor royal in 1930s England, and she is the author of several short stories, including the Anthony Award–winning “Doppelganger.” Her story “Voodoo” was chosen to be part of the anthology of the best of 50 years of Alfred Hitchcock Mystery Magazine. Ms. Bowen was born in Bath, England, and worked as an announcer and studio manager for the BBC in London, before moving to Australia and then California. It was here she started writing children’s and young adult novels, and then moved on to mysteries with the Constable Evans novels. When not writing she loves to travel, sing, hike, play her Celtic harp, and entertain her grandchildren. She lives in San Rafael, California.

“Once again Rhys Bowen proves why she's one of the great mystery writers working today…Atmospheric, tightly plotted, heart pounding, this is Bowen at her best.” —Louise Penny on City of Darkness and Light

“What could be more fun than a new Molly Murphy adventure? A Molly Murphy book set in Paris's avant-garde art world! A beautifully rendered portrait of the city and the period, seen from Molly's eyes as she deals with one of her most challenging cases yet.” —Deborah Crombie on City of Darkness and Light

“Filled with intriguing characters, especially Molly herself...Bowen sets the stage with background information and historical detail while she keeps the story moving.” —RT Book Reviews (4 stars) on City of Darkness and Light

“Feisty Molly unravels another knotty case while providing insight into life just after the turn of that other century.” —Kirkus Reviews on The Family Way