Laying Down the Paw (A Paw Enforcement Novel #3) (Mass Market) 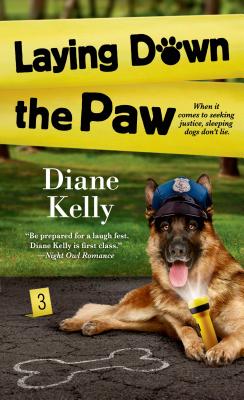 By Diane Kelly
Unavailable to Order
Hard to Find

This is book number 3 in the A Paw Enforcement Novel series.

Police officer Megan Luz and her K-9 partner are back-with a vengeance.

IT'S A DOG-EAT-DOG WORLD.
When a raging tornado hits Forth Worth, Megan's squad car is flipped over-and her devoted police dog, Brigit, is not amused. But that's not all that's upside-down. The streets are littered with looters-and members of a violent street gang-and no local business is safe. It's time to get back on all fours and see that the job of protecting the public is done.

BUT WHO'S LEADER OF THE PACK?
But Megan, outmanned and outgunned, has no choice but to let the gang members get away. Later, when she learns that one of them is a suspect in an unsolved murder case, Megan is determined to see that justice is served. But will she end up in the doghouse? Her investigation has her and Brigit barking up the wrong tree at every turn. Meanwhile, a killer's on the loose....who will stop at nothing to get what he wants.

“Funny and acerbic, the perfect read for lovers of Janet Evanovich.” —Librarian and Reviewer on Diane Kelly's Paw Enforcement series

“Humor, romance, and surprising LOL moments. What more can you ask for?” —Romance and Beyond on Diane Kelly's Paw Enforcement series

“An engaging read that I could not put down. I look forward to the next adventure of Megan and Brigit!” —SOS Aloha on Paw Enforcement

“Sparkling with surprises. Just like a tequila sunrise. You never know which way is up or out!” —Romance Junkies on Paw and Order

"Complex and touching, Laying Down the Paw has a heart the size of Texas." — Mystery Scene