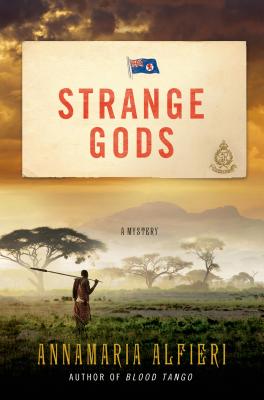 By Annamaria Alfieri
Unavailable to Order
Out of Print

In early 20th century British East Africa, there are rules for the British and different ones for the Africans. Vera McIntosh, the daughter of Scottish missionaries, doesn't feel she belongs to either group; having grown up in Africa, she is not interested in being the well-bred Scottish woman her mother would like her to be. More than anything she dreams of seeing again the handsome police officer she's danced with. But more grisly circumstances bring Justin Tolliver to her family's home.

The body of Vera's uncle, Dr. Josiah Pennyman, is found with a tribesman's spear in his back. Tolliver, an idealistic Assistant District Superintendent of Police, is assigned to the case. He first focuses on Gichinga Mbura, a Kikuyu medicine man who has been known to hatefully condemn Pennyman because Pennyman's cures are increasingly preferred over his. But the spear belonged to the Maasai tribe, not Kikuyu, and it's doubtful Mbura would have used it to kill his enemy. Tolliver's superior wants him to arrest the medicine man and be done with it, but Tolliver pleads that he have the chance to prove the man's guilt. With the help of Kwai Libazo, a tribal lieutenant, Tolliver discovers that others had reasons to hate Pennyman as well, and the list of suspects grows.

Annamaria Alfieri's Strange Gods is the first in a new series. Romantic and engaging, this mystery captures the beauty and the danger of the African wild and the complexities of imposing a culture on a foreign land.

Annamaria Alfieri is the author of Blood Tango and two other historical mysteries set in South America. Her first novel, City of Silver, was named one of the best debut mysteries of the year by Deadly Pleasures Mystery Magazine. Annamaria is president of the New York chapter of Mystery Writers of America and lives in New York City.

“With the flair of Isak Dinesen and Beryl Markham, the cunning of Agatha Christie and Elspeth Huxley and the moral sensibility of our times, Alfieri permeates this tragic novel with a condemnation of imperialism, a palpable love of Africa, a shocking conclusion and a reminder that good does not always triumph.” —Richmond Times-Dispatch

“In Alfieri's intriguing series starter, some humans are less trustworthy than the wild animals in British East Africa in the early 20th century. The author expertly captures the beauty and danger of the land and the duplicity of man.” —RT Bookreviews (4 stars)

“This fourth offering from acclaimed historical novelist Annamaria Alfieri is a departure from her earlier South American settings….a murder mystery with a romantic touch in an exotic land. The pages bring that era's African towns and jungles to life, which we would traverse today in the comfort of a jeep… we await the sequel, and the appearance of Out of Africa writer Karen Blixen.” —Historical Novel Society Review

“Alfieri (Invisible Country, 2012, etc.) aims for the audience who loved Out of Africa, with heartbreaking romance married to a complex mystery.” —Kirkus Reviews

“Alfieri illuminates the complexities and cruelties of colonial rule while giving readers an engrossing romance and mystery.” —Booklist

“Strange Gods is an absorbing historical novel, one set in an exotic location that provides a colorful and textured backdrop to the action. The beauty of the area and the inherent dangers of living there are brought to life in a realistic manner. The romantic relationship that is developing between Justin and Vera is touching, tender and poignant. The murder mystery storyline is an intriguing one, with credible suspects and no obvious culprit. A strong, solid start to this series.” —Mysterious Reviews

“An enjoyable read… This historical mystery novel set in the early 20th century Kenya is worth reading.” —Old Africa Magazine