The Curse of Jacob Tracy: A Novel (Hardcover) 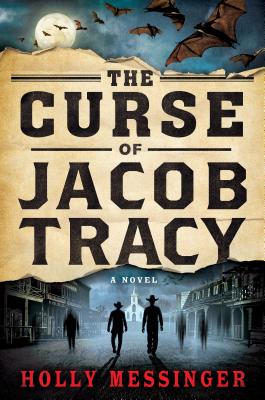 By Holly Messinger
Unavailable to Order
Out of Print

St. Louis in 1880 is full of ghosts, and Jacob Tracy can see them all. Ever since he nearly died on the battlefield at Antietam, Trace has been haunted by the country's restless dead. The curse cost him his family, his calling to the church, and damn near his sanity. He stays out of ghost-populated areas as much as possible these days, guiding wagon trains West from St. Louis, with his pragmatic and skeptical partner, Boz.
During the spring work lull, Trace gets an unusual job offer. Miss Fairweather, a wealthy English bluestocking, needs someone to retrieve a dead friend's legacy from a nearby town, and she specifically wants Trace to do it. However, the errand proves to be far more sinister than advertised. When confronted, Miss Fairweather admits to knowing about Trace's curse, and suggests she might help him learn to control it—in exchange for a few more odd jobs. Trace has no interest in being her pet psychic, but he's been looking twenty years for a way to control his power, and Miss Fairweather's knowledge of the spirit world is too valuable to ignore. As she steers him into one macabre situation after another, his powers flourish, and Trace begins to realize some good might be done with this curse of his. But Miss Fairweather is harboring some dark secrets of her own, and her meddling has brought Trace to the attention of something much older and more dangerous than any ghost in this electrifying and inventive debut.

HOLLY MESSINGER lives in a bohemian town in eastern Kansas, where she writes in coffee shops and sews costumes for a living. Her costumes have appeared at some of the world's biggest cosplay events, including Hulu's launch party for "The Awesomes" at San Diego Comic Con. She also appeared as a judge on the premiere season of SyFy's "Heroes of Cosplay." Holly's short fiction has appeared in Baen's Universe and Beneath Ceaseless Skies. The Curse of Jacob Tracy is her first novel.

“The Curse of Jacob Tracy is an absolute treat – a historical fantasy full of big ideas and vivid characters. Holly Messinger has crafted a debut that is weird, funny, riveting, thought provoking, and a ridiculous amount of fun.” —David Liss, author of The Day of Atonement and Randoms

“Fast-paced and compelling, The Curse of Jacob Tracy plays with familiar genre tropes while being a fresh and intriguing read from start to finish. The weird western renaissance is upon us!” —Molly Tanzer, author of Vermillion

"Stellar writing and a strong story define Messinger’s amazing debut. Messinger’s writing is a clinic on how to immerse the reader in a historic setting (such as his details on how 19th-century newspapers operated) without drowning readers in facts. Psychological and visceral horror mix in set pieces that build to a climax as Trace is forced to confront his fears about his abilities."—PW, starred review

"Combining well-wrought historical fiction with just the right amount of scenic details and horror with its tense atmosphere, Messinger's debut hits on a winning formula." - Library Journal, starred review and Debut of the Month