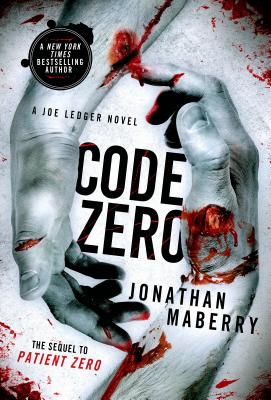 This is book number 6 in the Joe Ledger series.

For years the Department of Military Sciences has fought to stop terrorists from using radical bioweapons—designer plagues, weaponized pathogens, genetically modified viruses, and even the zombie plague that first brought Ledger into the DMS. These terrible weapons have been locked away in the world's most secure facility. Until now. Joe Ledger and Echo Team are scrambled when a highly elite team of killers breaks the unbreakable security and steals the world's most dangerous weapons. Within days there are outbreaks of mass slaughter and murderous insanity across the American heartland. Can Joe Ledger stop a brilliant and devious master criminal from turning the Land of the Free into a land of the dead?
Code Zero, a Joe Ledger novel from Jonathan Maberry, is the exciting direct sequel to Patient Zero.

JONATHAN MABERRY (he/him) is a New York Times bestselling, Inkpot winner, five-time Bram Stoker Award-winning author of Relentless, Ink, Patient Zero, Rot & Ruin, Dead of Night, the Pine Deep Trilogy, The Wolfman, Zombie CSU, and They Bite, among others. His V-Wars series has been adapted by Netflix, and his work for Marvel Comics includes The Punisher, Wolverine, DoomWar, Marvel Zombie Return and Black Panther. He is the editor of Weird Tales Magazine and also edits anthologies such as Aliens vs Predator, Nights of the Living Dead (with George A. Romero), Don’t Turn out the Lights, and others. Find him at www.jonathanmaberry.com and on all social media platforms.