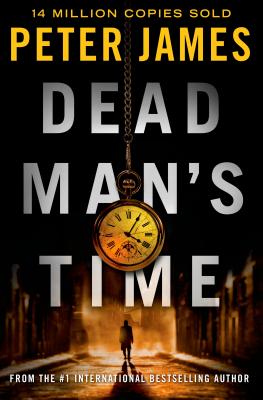 By Peter James
Unavailable to Order
Hard to Find

This is book number 9 in the Detective Superintendent Roy Grace series.

In Dead Man's Time, the latest from international bestselling author Peter James, Roy Grace finds himself up against that most dangerous of all adversaries a man with fury in his heart who has nothing to lose.

New York, 1922. Five-year-old Gavin Daly and his seven-year-old sister, Aileen, are boarding the SS Mauretania to Dublin and safety. Their mother has been shot and their Irish mobster father abducted. Suddenly, a messenger hands Gavin a piece of paper on which are written four names and eleven numbers, a cryptic message that will haunt him all his life, and his father's pocket watch. As the ship sails, Gavin watches Manhattan fade into the dusk and makes a promise, that one day he will return and find his father.
Brighton, 2012. Detective Superintendent Roy Grace investigates a savage burglary in Brighton, in which an old lady is murdered and 10m of antiques have been taken, including a rare vintage watch. To Grace's surprise, the antiques are unimportant to her family it is the watch they want back. As his investigation probes deeper, he realizes he has kicked over a hornets nest of new and ancient hatreds. At its heart is one man, Gavin Daly, the dead woman's ninety-five-year-old brother. He has a score to settle and a promise to keep both of which lead to a murderous trail linking the antiques world of Brighton, the crime fraternity of Spain's Marbella, and New York.

Roy Grace, in a race against the clock to stop another killing, has met his most dangerous adversary yet.

PETER JAMES is the #1 international bestselling author of the Roy Grace series with more than 13 million copies sold all over the world. His novels have been translated into thirty-five languages; three have been filmed and two are currently in development. All of his novels reflect his deep interest in the world of the police, with whom he does in-depth research. He lives in England.

"Increasingly deserves to be measured against the best in the genre." —Kirkus

"All wittily told." —RT Book Reviews 'Top Pick!' "Tightly-plotted and historically accurate, Dead Man's Time is a wild ride through past and present." —CurledUp.com Praise for Not Dead Yet: "James really knows how to plot a procedural thriller, and he enjoys a sly joke." —The New York Times Book Review